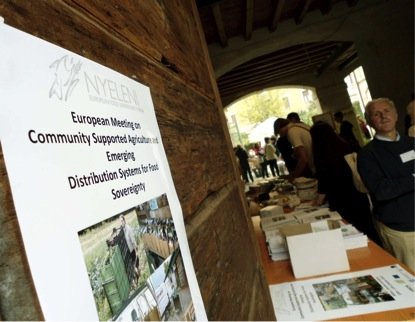 Conclusions from Milan: an European CSA movement has come to life

The first European meeting on Community Supported Agriculture and Emerging Distribution Systems for Food Sovereignty was held 10-12 October 2012, in Milan. For three days, 120 participants representing 20 different European countries, from Ireland to Turkey and from Portugal to Lithuania, worked on how to connect CSA initiatives right across Europe, so that mutual support can be provided and knowledge and stories can be shared in a decentralized and open way. The common ground for all these actors is their everyday work in running CSAs, and their shared feeling that coordination is necessary at European level.

This meeting was an on-going part of the European Food Sovereignty Movement, launched in Krems (Austria) in August 2011, and as an enactment of the Nyeleni Europe Declaration on Food Sovereignty. Urgenci was given the mandate to pursue the actions proposed in axis 2 of the declaration, in changing the way food is distributed and consumed.

The preparation of this meeting, in which about 30 Steering Committee members were involved, led to the emergence of a new kernel of actors that are extremely committed to the project.

The meeting gave birth to an European Umbrella of CSA movements, consisting of a temporary coordination team called the Kernel, 4 thematic groups and 4 cross-border exchange projects.

This new platform of European CSA movements is hosted and supported by Urgenci, and designed to function exactly like an umbrella. Most of the time, the umbrella is open: the groups work autonomously on a thematic basis, trying to ensure cross-border communication. Then, the umbrella gets closed during the regular physical meetings, when everybody comes together. The final step is to structure the movement at the European level.

It is made up of 9 members in charge of setting up a permanent structure. The mandate givem by all the participants at the Milan meeting, is supposed to expire when the next meeting takes place, with the objective of finalising the creation of the structure that has already been named Urgenci-Europe. A set of criteria to set up this permanent Kernel have already been determined. The permanent Kernel should be established during the Second European meeting on CSA, to take place next winter.

The meeting in Milan perfectly fulfilled its role as a project matrix. Following the meeting, 4 transnational projects were collectively built ; they involve at least 16 different countries. This should bring further support to genuine CSA development in contrasted agricultural and social contexts. These projects mostly focus on the training of CSA promoters, research and education on CSA models in 10 different countries, and the logistics of emerging distribution systems in 5 different countries.

An action plan has been drafted for the following self-managed working groups:

The roadmap is clear, projects have been established, actions are being taken, but everything is not perfect. The challenges need to be addressed during the second European meeting on CSA next winter.