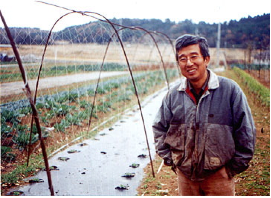 In the beginning there was “TEIKEI”, by JOAA

Our association has made it a principle to establish the “teikei” system between the producers and the consumers. “Teikei” is an idea to create an alternative distribution system, not depending on the conventional market. Though the forms of “teikei” vary, it is basically a direct distribution system. To carry it out, the producer(s) and the consumer(s) have talks and contact to deepen their mutual understanding: both of them provide labor and capital to support their own delivery system. In this system they usually set delivery stations, where the nearest consumers of 3 to 10 families can get the delivered products.
The Japanese organic agriculture movement started with this “teikei” system. “Teikei” is not only a practical idea but also a dynamic philosophy to make people think of a better way of life either as a producer or as a consumer through their interaction.

“If you simply stick to the technical viewpoint that organic agriculture is agriculture managed without the use of chemicals, you will fail to notice many paradoxical problems you face today.” (Teruo Ichiraku)

Simply put, the Japanese organic agriculture movement aims to get agriculture the way it should be. Many aspects of Japanese agriculture are deformed; technical systems, management, philosophy, distribution systems, consumption structures, agricultural policies and so on. Ours is a grassroot movement to improve those crooked situations through changing our own way of life and thinking.

In other words;
(1) chemical hazards are not merely a matter of techniques,but a symbol of the total malfunction of distribution systems, consumption structures and agricultural policies;
(2) the swollen commercialistic market and food industry intercept the communication between producers and consumers, eventually misleading the both of them;
(3) therefore consumers are also responsible, even if they are unaware of it, for this evil circle;
(4) in order to correct it producers and consumers should build an organically combined relationship between themselves and be involved in the movement, understanding and helping each other. This is what we have always emphasized in directing our movement.

The most characteristic method we have established in our movement is “teikei” (the co-partnership between producers and consumers). You will be surprised to find that it will dynamically change the consumers’ ways of life and the producers’ ways of management through their interactions by the medium of the products. Needless to say, they have their own creative way of distribution now.

Agriculture ecologically sound and ultimately self-sufficient
The basic function of food is to nurture life and so the basic function of farming is to feed the farmer’s own family. To feed your family you have to be self-sufficient. You have to grow different items in an appropriate amount and raise some livestock. The scale of your management should not be so large. It is a sustainable way of farming with your own compost and livestock manure for fertilizer and seeds and livestock feed collected by yourselves. In the “teikei” system consumers (usually urban dwellers) are supposed to be supplied with a surplus amount of producers’ crops and products. In a sense they belong to one big family in each case.
Food is not supposed to be sold for a profit. As a matter of course, efficiency is not so important as with the manufacturing industry, and hazardous chemicals are not applied for mass production. The important thing is to draw natural productivity, making an ecological use of organic materials available in the locality for fertilizer. The agriculture should be full of vitality in harmony with nature.

Consumers help producers as a farming experience
Such agriculture as is mentioned above takes labor. With the “teikei” system, consumers visit their producers to help on the farms, sharing the labor needed for the converted management. We have named it “en-no”. The frequency and quantity of their aid varies depending on the groups. A common merit is to understand better the people on the farm and what agriculture is like through their direct commitment to farming activities.

The simplification of selection and packing
In the conventional Japanese market you have to pay much attention to the size and appearance of displayed items and prepare a specified amount of a specified crop. These are the major reasons for the widely-operated application of agricultural chemicals. With the “teikei” system producers have to carry out little selection in distributing their products to their consumers; big or small, with or without mud on them. The packing is much simpler, saving labor.

Self-distribution
The delivery is made by themselves, producer or consumer. The producer will know who will eat their produce and the consumer will know who takes care of it. They will be familiarized with each other and get a better understaning of each other’s way of life through conversation and working together. “Teikei” stands on the friendly relationship between producers and consumers.

Reform in diet
Consumers change their ways of diet and shopping to a great degree. They take, as a rule, all the produce delivered from the farm, disregarding the amount, size and appearance.
They get skilled in choosing recipes to consume all of the produce: our mot to is to eat from root to leaf.
They adjust themselves to the seasonal items. It is not recipes but materials that come first. Whatever crops each season offers in a natural way are truly nutritious and good, so they avoid products artificially grown out of season.

How to decide prices
“Producers should be regardful of consumers’ diet and health, and consumers are regardful of producers’ livelihood.”
Prices are set with an agreement on both sides through a direct negotiation. Such prices are in most cases higher than the ones set at the shipment in the conventional market to the producer’s satisfaction. On the other hand consumers are delighted with the prices, which are as inexpensive as the ones at grocery stores and at the same time the products are safer and better. Those “teikei”prices are usually set so as to guarantee a moderate sum of living expenses and production costs for producers. In that they are evidently different from the prices at the conventional market born out of the supply-and-demand balance.

Some consumers’ groups go to such a remarkable extent that they compensate the decreased income of the producers caused by the conversion of the management; they prepare a farming fund (a loan without any interest at all); they make a contribution to the producers when they are in some financial trouble because of natural disasters, accidents and the like.

In this way consumers take some burden of their producers, who have been brave enough to convert their management to organic; procuders got a relatively steady income, little affected by annual fluctuations in harvest or in market prices. They can obtain a financial security with this “co-existing relationship”.
It simultaneously makes the producers devoted to the perfection of the method or sustainable agriculture. The consumers, as a happy result, can enjoy a stable supply of healthy safe organically-grown products.

These previous experiments and experiences were summarized into “The Ten Principles of Teikei” in November, 1978. Our movement has since been developed very much conscious of the”teikei” principles.