By Jocelyn Parot, General Secretary of the international network Urgenci

Bayer bought out Monsanto for 66 billion dollars. The game of Monopoly continues with a small number of agro-industrial giants sharing out their control of living organisms. The reaction of millions of people to this is one of urgency: they share the feeling of a need to act, to take back control of their food systems. Their slogans are the independence of peasants, consumers right to choose and the collective right to decide what model of food system we want. Their collective actions cover a broad  scope. But one of the most highly developed and demanding approaches is that of Community Supported Agriculture (CSA).

The terms covers AMAPs, the French Associations for “Maintaining Peasant Agriculture”, as well as its historical precursors, Teikei in Japan and CSA (Community Supported Agriculture) in North America. It encompasses a system of direct contractualised sales based on the direct relationship between producers and consumers. All exchange is based on human relationships, shared risks and responsibilities, and the fruits of farming, and everything is based on a long-term commitment.

The movement is growing in many different contexts, from England, where the food systems have been globalised for centuries to Romania, where there are still millions of subsistence farmers. Yet the same questions are recurrent everywhere, to a greater or lesser extent: the environmental issue, with conventional agriculture causing high levels of greenhouse gas and the high use of fossil fuels; health and safety, and the recurrence of health scandals in the agri-food sector. And finally the disappearance of the peasants, with an average age close to 60, and the corresponding rural exodus.

According to the European census carried out in 2015 in 22 European countries, there are between 600,000 and one million people involved in partnerships of this kind in Europe. The variation in these figures is based on the diversity of the movement itself, its spontaneity and creativity. It is difficult to keep track of what is exponential growth in some places, and more moderate development in others. And time frames also vary. Germany is currently undergoing an explosion of CSAs, similar to what happened in France ten years ago.

150 peasants and eaters from 26 countries stretching from Ireland in the West to Georgia in the East and Norway in the North to Greece in the South of Europe came together from 16th to 18th September 2016 in the framework of the 3rd European Meeting of Community Supported Agriculture movements in Ostrava in the Czech part of Silesia in a venue that perfectly illustrates the post-industrial transition. The Dul Hluina site includes the remains of a coal mine, that can be seen from miles away, a coking plant and a steel plant with three blast furnaces. This exceptional site has been transformed into a conference centre, a cultural centre and recreational space and symbolises the transition from one model to another.

In the initial call to action, Urgenci, the international CSA network presented these partnerships as a way to heal the wounds inflicted to our societies. The ancient Greek word, pharmakon also meant poison. We know that one and the same substance, used differently, can kill or cure. The CSA movement thus needs to examine the question of its impact. There is a risk that CSA could also aggravate social issues if it is based on a closed, introverted community, or where localism blinkers members to cross-border solidarity. Can it not also aggravate economic difficulties if it is merely a front for words and ideas for financialised start-ups?

On the contrary, CSA provides an antidote when it is anchored in adequate training and supports a critical approach, and when the success are evaluated in a critical manner together with the world of research. CSA is an antidote wen its development is accompanied by the education of youth on the possibilities of new ways to consume or when those involved reach beyond social cultural divisions to influence public policies. The strength of CSA lies in the day-to-day approach of direct relationships that are on a person-to-person basis. Nevertheless the network needs to include measures so that the benefits of socially responsible food systems that are also economically viable and ecologically sustainable can be shared.

It is this feeling of solidarity and responsibility that led to the collective work of the Declaration that was adopted Saturday December 17th in Ostrava. There were already several founding texts: the principles of Teikei written by Teruo Ichiraku (1978), the revised  Charte des Amap drafted by the Mouvement interrégional des Amap in 2014, the UK CSA Charter. But there was no joint European text. This Declaration is the fruit of fifteen months of work, three European workshops and fifteen national drafting workshops, as well as hundreds of individual and collective contributions.

How to breathe on-going life into the European Declaration? 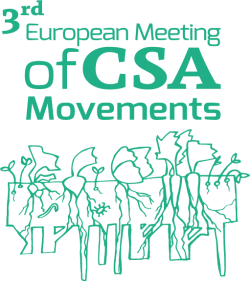 A declaration should be part of a shared strategy. Its first and foremost importance is to inspire isolated initiatives and proclaim the social movement character of CSA and show how all European actors are speaking as one. This Declaration is the movement’s identity card. The Declaration also aims to limit capture of CSA, by clearly stating its objectives. We don’t live in the world of Teletubbies! Even in California, local actors were obliged to include the definition of CSA in the Farm Bill, the California State’s agricultural law. It had become necessary to stop the way in which platforms were selling up to 30 000 “boxes” through a wholesale-retail scheme. In Europe there are also an increasing number of commercial capture schemes and commodification of the principles. We need to clarify our specificity in order to protect ourselves against this kind of copycat theft.

Our third mission is to provide a reference text for advocacy. CSA partnerships represent an increasingly visible and recognised social connection. We need to dialogue with institutions, especially those that are trying to build concrete solutions. But we need to do so in a way that remains coherent with the Declaration. CSA is not a global solution. It is a context -sensitive approach. This is why it is so vital for the actors involved to have a keen awareness of being part of the wider Food Sovereignty movement. Food Sovereignty means protecting the future of our food and protecting it from the limitations that multinationals would like to impose. The Ostrava Declaration should be considered in the context of the open-mindedness of future possibilities. It provides us with a compass, a roadmap we can use before we set out on our journey. It is not an end in itself, but a collective path and process.