This country item is part of the First Mediterranean CSA Mapping report generated in April 2016.

Author: Annie Mellouki is one of the funders of RIAM, the Network of Agroecological Initiatives in Morocco. RIAM brings together all th

e actors in Morocco that are working on the issue of sustainable, healthy food production inspired by the principles of Agroecology. Annie Mellouki has also been a major contributor to the mapping process in terms of designing the methodology and offering an example of what information can be provided.

Morocco, with a surface area of 710,850 square kilometres, includes 3,600 kilometres of coastline, 510 km of which are on the Mediterranean.

Water is a major issue in Morocco, since a large part of the country’s rivers and oueds dry up for several months each year, and sometimes even for several successive years. The climate in Morocco is both Mediterranean and Atlantic, with 2 main seasons: a dry, warm season (Summer) and a wet, cold season (Winter). Some regions of Morocco belong to the Sahara desert zone.

Morocco has a population of almost 33,3 millions inhabitants. The urban population accounts for 60.3%, which is the result of an intensive rural exodus. More than a quarter of the urban population is concentrated on the 200 km-long urban corridor on the Rabat-Casablanca axis. The key sectors of the Moroccan economy are linked to phosphate mining, agriculture, tourism, and various export industries (cars, agrifood…). The percentage break-down of the main economic sectors in the GDP are: agriculture 17%, industry 28% and services 55%.

Agricultural policy since 2009 has been structured by the Moroccan Green Strategy, designed to make the sector competitive and to use it as an engine for national economic growth as well as in the fight against poverty. This strategy definitely primarily aims to boost industrial agriculture, but it has also supported organic agriculture in a marginal way.

Organic agriculture has been developing in Morocco for over 30 years. It has however remained a small part of the country’s agricultural production, and is mostly export-driven. Steps have recently been taken to reorganize and develop the organic sector. In 2010, a professional association, called Amabio, was created; in 2012, the law #39-12 was passed to regulate and promote the sector and a national organic logo was designed. Organic certification is currently delivered by 6 certification bodies, on the basis of the existing organic agricultural standards in Europe and the USA. The development efforts of the 5 last years have resulted in a 5-fold increase in production that now reaches 70,000 tons, of which only a fifth is exported (12,000 tons).

Sustainable agriculture[1] of different kinds is well represented in Morocco. A majority of smallholders have traditionally managed their land in a natural and ancestral way using agroecological techniques. Chemical inputs have not been used, both because of the consciousness that biodiversity is at work, and because of insufficient available financial means. This situation is now evolving, and a growing number of businesses are looking at Moroccan fertile areas with interest. In remote areas, agroecological practices seem to have a bright future.

A new trend that can be observed almost everywhere, although on a numerically limited scale, is that of new farmers deliberately partially or fully choosing permaculture or agroecology for their farms: mulching, chemical-free techniques, GMO-free, natural and integrated pest control, composting, renewable energies, water-conservation systems, solar pumps, eco-building, seed saving, agroforestry, are among the practices inspired by agroecology and that are considered sustainable. This emerging movement is still to be consolidated.

The marketing of sustainable agriculture products or “beldi” products (fresh from farm) in Morocco is mostly done through specialized organic shops, large-scale retailing shops (even if the organic sections in hypermarkets are quite small and clearly dominated by imported products), farm shops, e-shops, home-delivery companies or at basket pick-up points in local shops. Some farmers are also selling to restaurants such as the committed restaurants of Chefchaouen.

Alternative certification (Participatory Guarantee System) has already been studied and promoted by RIAM (Agroecological Initiatives’ Network in Morocco). There is at least one functioning example, thanks to the association Aftha in Chefchaouen.

Training in sustainable agriculture is still rather under-developed in Morocco. Currently, training in agroecology, permaculture or organic agriculture is mostly conducted by Moroccan or foreign associations. They organise workshops or training camps, as well as a few long-term training sessions.

History and characteristics or CSA in Morocco

Various regions of Morocco have been witnessing the creation of many direct partnerships between producers and consumers. There are several existing models: the weekly share-model (with or without upfront payment), delivered in town or at the farm, farm-gate direct sales systems, deliveries to specific organic shops, as well as partnerships between committed restaurants and local producers. 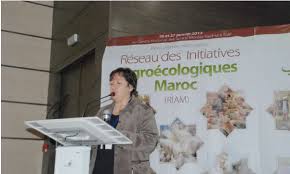 If we follow the more formalised and demanding definition of CSA as described by Urgenci in its European handbook on CSA[2], then the concept of CSA, with risk sharing, seasonal prepayment and written contract, is not very widespread in Morocco.

There are 5 initiatives of this type: Swani Tiqa  in Rabat – Swani tiqa Najib, Swani tiqa Radouane and Swani tiqa Mustapha, 1 in Mohammedia, the Britel farm, and 1 in Casablanca, the Bioconfiance Gardens Dar Bouazza under the supervision of Bouchaib Harris who is currently experiencing some difficulties.

These upfront payment-based initiatives have several years of experience. The 3 Swani Tiqa and the Bioconfiance gardens started in 2009. The Britel Farm is 2 years old. All these initiatives are autonomous, individual or associative. They are coordinated by a network called Agroecological Initiatives’ Network in Morocco, RIAM. 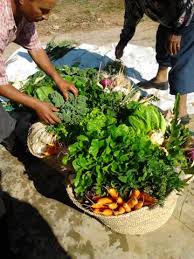 Their common principles of solidarity and direct producer-consumer relationships are all reflected in the 2015 Nyéléni Declaration on Agroecology. Efforts are still needed to remove some barriers, focusing on the reinforcement of capacity building in agroecological practice, access to Commons and transfer of skills.

[1]          “Sustainable agricultures” is the term used to speak about organic agriculture, permaculture and agroecology.