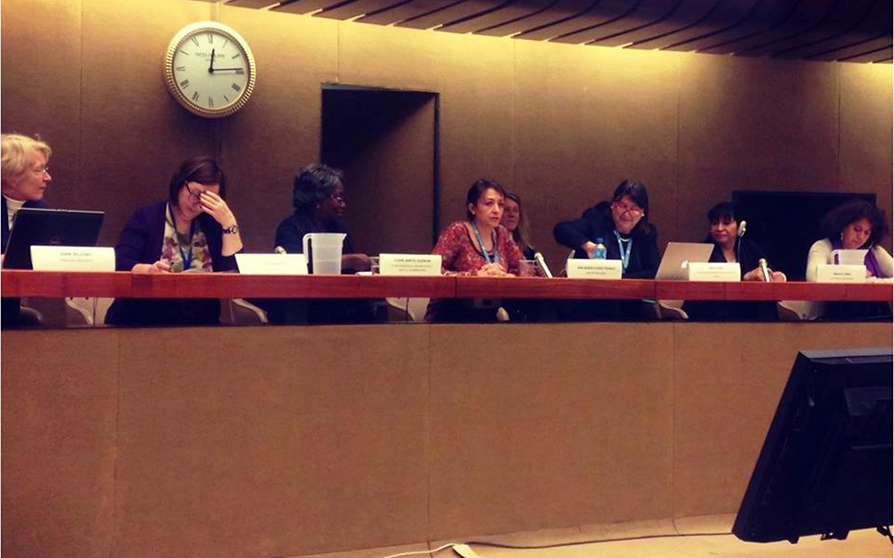 A week ago, to celebrate the 8th of March, the International Women’s Day, I attended a side event at United Nations in Geneva organised by FIAN. It was called : “No Right to Food without Women’s Rights”.

It was pretty impressive getting into the UN building, through the security checks. I was pretty proud to be a representative of Urgenci there !

The main idea behind this meeting was to give space for women’s rights at grassroots level. It started with a round of applause for Berta Casares, an environmental activist who was killed the previous week.

We then heard the testimonies of ladies fighting for women’s rights in agriculture in different countries. Many thanks to Hilal Elver, Claire Ameyo Quenum, Magali Cano, Sandra Moreno and Anne Bellows for their insights.

–          In Togo women are in charge of the food, as most men are polygamous, if not gone or even deceased. As there is a lot of pollution due to phosphate mining, they go to the main towns to sell part of their hard worked on production, but have to sleep rough on the streets. International companies sign secret contracts with the government, but do not take their responsibilities. There is therefore a need for specific attention so women can participle to food sovereignty and a need for regulation of international companies, as the right to food of women must be taken into account.

–          In Spain access to land is very difficult to women, in a country where agriculture is getting more and more masculine. They suffer a double discrimination : as women and as farmers. And we must not forget the seasonal workers’s working conditions.

–          On the tea plantations in India, the working conditions are horrible, people suffer from malnutrition, bad housing, no water, no sanitation, bad health and safety, and 77% of these workers are women ! But the women get organised with the help of Trade Unions.

–          In Guatemala there are many illiterate women in rural areas. Women play an important role, they decide what their family eat. Even if men can provide means women are the ones responsible of feeding their children. Some women are fighting hard by suing the government.

–          A view from Anne Belows : Globalisation of agroindustry disempowers local communities. We should implement a better food system that is agroecological with recognition of women as food producers and processers.  We should take into account local food system response, from breastfeeding to complimentary feeding to local food and traditional, cultural eating.

–          A view from Hilal Elver : Generally EU looked as a managed legal structure, but surprisingly there are also problems in Europe. She stressed that home countries of international companies have to look at human rights abuses. At another level she said that malnutrition and right to food can be different, that women are not only mother and farmer but also an individual. It must be said that peasants also victims of right to food violation in Europe, not only in the Global South !

The picture was taken by FIAN, during the Meeting.