Splitting the Banana: How Long and Short Value Chains should jointly Face Deregulation 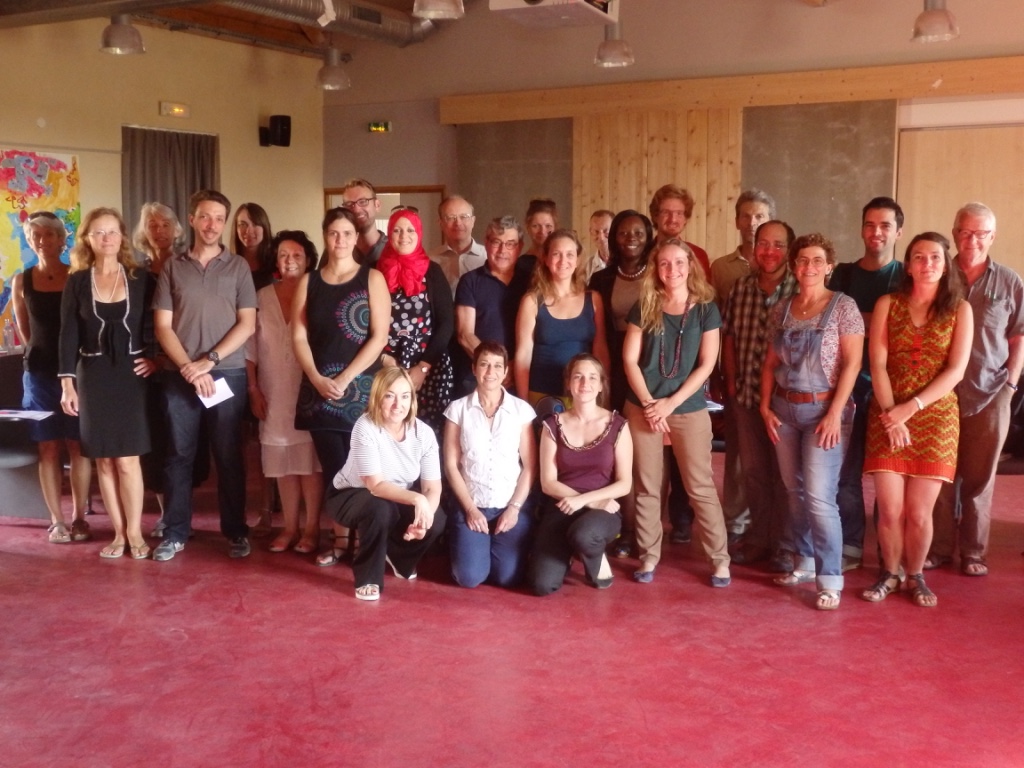 Splitting the banana: how long and short value chains should jointly face deregulation.

A seminar on the regulation of value chains was held at end of August at the Villarceaux Oecosite 60 km West of Paris. It was initiated by Banana link and Basic, with the support of the Charles Leopold Mayer foundation for the Progress of humankind.

The seminar turned out to be the moment for a long-awaited exchange between local and global fair, sustainable food initiatives.

The participants were from various backgrounds: fair trade, trade unions, think tanks, the academic world and social justice networks. Urgenci was one of the few participating organizations that focus primarily on local food systems.

Another interesting feature of the seminar was the variety of value chains involved. Food was of course the number one focus, but there were also presentations on value chains in other areas of production: electronic devices, clothes, minerals…

Bananas symbolize Fair trade. Within the local food movement, they are sometimes considered as a negative symbol of everything contrary to local food. Yet, the main lesson learnt from this seminar is that local and global value chains are undergoing similar changes. Their stakeholders should unite to face common challenges.

Our account of this seminar will be based on 3 questions:  What is the participants’ shared vision of the challenges ahead?  What counter-powers prevail? What synergies could emerge from the meeting between globalized value chains and local food systems?

1. The shared diagnosis: an ongoing deregulation in the value chains.

The participants shared the same opinion in terms of their evaluation: the current period is characterized by an ongoing deregulation of value chains.

In a long-term perspective, we would be living in a 4th global trade period. After an initial phase qualified as “mercantile”, after a “capitalist” period (until the period between WW1 and WW2), followed by a “Keynesian” era (especially after WW2), we are now be undergoing a “liberal” period.

This period can be distinguished from the preceding ages as a time of both dramatic weakening of the power of States on one hand, and, on the other hand, the increasing domination of commercial law over social and environmental norms.

As a sign of this continuous deregulation process, the unemployment allowance rates for high, middle and low income populations have all been decreased over the last 20 years, irrespective the country under consideration (International Labour Organization, 2015).

The growth of “voluntary self-regulation” is just another symptom of the general trend: as all compulsory frameworks are being removed one after the other, we see the multiplication of private stakeholders, especially certifying bodies that aim to replace the “institutions”. This is considered a threat, particularly by the trade unions.

2. How to counter the concentration of power over these value chains?

There are several sources of counter-power that can prevail over corporate powers. The first source is legal. During a video presentation, Olivier de Schutter, the former Special United Nations Rapporteur for the Right to Food, stated that the principle of the obligation of due diligence should automatically apply to any European company, irrespective of the country of operation. Moreover, it should also apply to all its suppliers, and to any company wishing to operate in Europe. Similarly, access to justice in Europe for victims of subsidiaries of European Union-based corporations should be generalized. Finally, there should be an obligation of mutual cooperation, support between States to protect human rights and control so that companies respect these rights.

Apart from the legal source of counter-power, there are also some positive models of self-regulated value chains, thanks to multi-stakeholder initiatives. A convincing example is the World Banana Forum. This space of negotiations that brings together banana-producing and shipping companies, unions, NGOs, cost-measuring audit agencies, has progressively led to an increase in workers’ rights and salaries in some States (including Ecuador), as well as in some of the biggest banana trade corporations.

However, it seems the initial impetus for the forum came from Civil Society, and even more precisely from consumers’ organizations. Consumers can grow to become a counter- power if they campaign efficiently. However, once a campaign has generated a largely shared public awareness, work still needs to be done in order to measure the negative externalities, quantify them and set up internalization mechanisms.

The “over-regulation” trap should be avoided. Imposing social and environmental norms should not happen to the detriment of small-scale operations. Sanctions should be gradual, the compliance upgrade process should be adapted. There should be an in-depth scaling effort, to find the most appropriate set of rules for each type of organization. It is part of the deregulation phenomenon that through intensive lobbying, large-scale corporations manage to impose rules that reinforce their position and eject small-scale producers.

Moreover, private auditing companies will never replace unions as defenders of workers’ rights. Their auditors should be trained to be able to work with unions instead of bypassing them.

3. Where global meets local: taking the territorial dimension into account

An efficient way to internalize the social and environmental costs of production is to take the territorial dimension of production into account. Nowadays, there is a whole array of labels and logos that have been designed to bring the production’s impact on local communities into the picture. The word “territory” provides a better vision of the penetration and integration of production processes in their immediate geographical environment.

3.1 What local food systems could learn from fair trade initiatives

When we think in terms of local food systems, or even in terms of direct sales models, the first intuition is that norms are of little use. The value chain seems to be too short, if it even exists.

However, as the Californian Community Supported Agriculture (CSA) movement example shows, even a direct relationship like CSA can be subject to normalization. Thanks to the advocacy work done by the Community Alliance for Family Farmers, 4 paragraphs of the State of California’s Farm Bill were passed in 2014. The goal was to restrict the use of the CSA concept to “farm-based operations”, and thus to avoid its capture by large-scale aggregated box schemes.

From a social movement-building perspective, local food initiatives could learn a lot from the Participatory Guarantee System (PGS) experience in the Fair Trade movement. PGS can be understood as a methodology to jointly develop criteria to validate the use of a protected name or a label. It can also be seen as a pedagogical tool to raise field practicioners’ awareness of the principles guiding these initiatives.

The needs for training between long and short value chains appear to converge. One of the future actions to that could be jointly undertaken could be shared training. This could result in a more systematic inclusion of local food systems in training provided by fair trade organizations. In fact, this is already being done within some fair trade projects, where the aim is to limit communities’ dependence on long value chains.

The example from the World Banana Forum shows the bridge between consumers organized at local level and consumers ready to campaign for fair food at global level. The banana does not split. It unites.

One of the conclusive words of the seminar was to call for the “Battle of ideas”. The greatest strength of the seminar’s participants was indeed their diversity. These unique exchanges are paving the way for an alliance between various counter-powers (unions, consumers’ organizations, lawyers…). Joint communication campaigns could provide a perspective for mobilization for this nascent group.

The battle of ideas will however be tough, if not desperate. The huge divide between globalization winners and globalization losers; the widespread perception of the “social and ecological transition” as a punitive, top-down imposed set of norms that will result in factories closing and job losses; the viral temptation to retreat from the world: all these phenomena are feeding huge resistance to any greater implementation of social and environmental norms.