Urgenci is a member of the International Planning Committee (IPC). This platform is very precious to the social movements, as it is where they strategise collectively and prepare for policy input into FAO meetings at global level.

IPC was also historically the structure that built the reform of the Committee on World Food Security and Nutrition, and enabled the unique structure of the Civil Society Mechanism to be born.

Over and above these historical roles‎, IPC also facilitated Urgenci’s Memorandum of Understanding with FAO.

The IPC holds a General Meeting every 2 years. This one took place in Paarl, about 50 km from Cape Town. It was organized by WFFP, the World Forum of Fisher People.

Below is the final declaration fo the meeting. Also available there:

“We build a global food system based on our agroecology and food sovereignty! 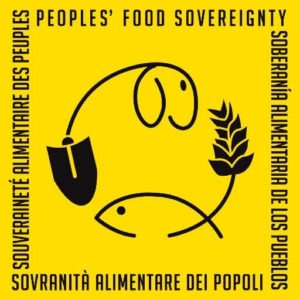 We, the representatives of peasants and family farmers, landless, rural women and rural youth, fishers and fish workers, agricultural workers, hunters and gatherers, pastoralists and herders, Indigenous Peoples, and food consumers from all over the world and who are all members of the IPC, met in Paarl, South Africa to take our struggle for food sovereignty and agroecology forward. Our meeting took place during the worst drought in Cape Town ever recorded, only a few weeks ahead of Day Zero, which marks the day when the taps run dry. We stand in solidarity with the masses of poor and marginalized people in Cape Town whose health is at risk as access to clean drinking water is jeopardized – just as in many other territories. The water crisis marks just one of many of the serious threats we are confronted with all over the world because of neoliberal policies, extractivism and other disrespectful relations with nature leading to the protracted climate crisis.

We pay tribute to our comrade and fellow fighter Kuria Gathuru who passed away in September 2017.

We, as small-scale food producers and consumers – including urban poor, marginalised communities, refugees, displaced peoples, and those living in occupied territories – rely on our land and water territories as well as on access to and control over land, water, native seeds and our animal breeds to produce and access healthy, affordable and nutritious food and to maintain our cultures and livelihoods. We also need special focus to protect the open pollination of seeds and for bees and other insects and protection for our bee keepers. The multiple crisis we are facing today – including degradation and loss of our lands, pollution of oceans, dwindling access to water, and the advancement of reactionary governments , corporate capture of institutions and governance structures, capitalist patriarchy, extractive industries, xenophobia and anti-migrant policies, growing economic inequality and climate change – is a threat to our human rights and to the planet.

Over the past few years the food sovereignty movement has made many achievements. We played a key role in the reform of the United Nations (UN) Committee on World Food Security (CFS). We have succeeded in ensuring the endorsement of UN instruments: In 2012, the CFS endorsed the International Guidelines on the Responsible Governance of Tenure of Land, Fisheries and Forest, and in 2014 the Food and Agricultural Organisation (FAO) endorsed the International Guidelines for Securing Sustainable Small-scale Fisheries in the Context of Food Security and Poverty Eradication. 2014 was also the year when FAO decided to establish a department to advance the agroecology agenda, and in 2016 the CFS adopted an innovative monitoring mechanism to follow the implementation of all policy decisions taken at the CFS. We, the members of the IPC played a critical role in all these processes and we remain committed to work with FAO and the CFS in good spirit and on a non-negotiable human rights basis, especially for the right to food and nutrition, to ensure continued implementation of these instruments while defending their true meaning .

The rights of women to participate in decision making spaces remain compromised in a world that is still dominated by patriarchal forces. We recognise the central role of women in food sovereignty and agroecology in all our constituencies, and we commit to fight for women’s equal rights with emphasis on the right to participate in decision-making process at all levels. Feminism is at the core of our struggle to end all forms of violence against women and to eliminate patriarchy. In a similar vein, rural youth remain largely politically marginalized in society. We commit to strengthening the autonomy of women and youth and continue our struggle for equity and equal participation.

Transnational corporations (TNCs), including agribusinesses, finance corporations, extractive and energy companies, continue the plunder of nature and heating our planet. Their capitalist and extractivist business models are transforming nature into economic and financial assets. TNCs are fueled by the WTO and Free Trade Agreements, opening the door for exploitation and destruction of nature in foreign countries, and to land and ocean grabbers. Together with governments pursuing fast economic gains at the expense of the people, the road is paved for dispossession of people from their territories. Witnessing criminalization, imprisonment and even assassination of human rights and environmental defenders, we stand in solidarity with all those who face violence when defending their communities and nature.

Climate change is one of the major challenges of our time and it compels us to action. We experience more frequent droughts but also severe flooding due to heavy rains, and both have tragic effects on our ability to produce food and feed our peoples and maintain our cultural traditions and livelihoods. Diminishing access to water is both the result of climate change and the enormous volumes of this precious resource used by agribusiness and energy corporations. The solutions to mitigate climate change put forward by our governments fail to address the underlying causes and continue to allow the biggest polluters – including agribusinesses, energy and mining companies – to continue heating our planet. The mitigation mechanisms of the the United Nations Framework Convention on Climate Change – including REDD+, Blue Carbon and Climate Smart Agriculture that are also promoted by FAO – are false solutions. Real solutions to stop climate change are rooted in peoples’ access to and control of land and water and promoting agroecology, nature restoration and water retention landscapes. We will continue our struggle to advance our solutions in all the spaces where we are present, including the FAO, UN Framework Convention on Climate Change and the Convention on Biological Diversity and the UN Human Rights Council.

As a last resort, when life offers no alternatives because of dispossession from our territories or climate disasters, we have to resist through migration. However, even under these circumstances, we are being criminalized in the countries where we seek shelter and better lives. Justice is urgently needed, and we condemn the policies and inhumane treatment of immigrants all over the world who endure sexual harassment, slavery and imprisonment.

To ensure that our voices from the grass roots level are heard and our experiences are taken into consideration in decision-making, we will combine our struggles at the global level with increased focus on governance at local, national and regional levels. To take on these challenges, we commit to empowerment and improved communication in and between our movements on our concrete existing solutions. Real alternatives to the current food system already exist both locally and internationally through agroecological production, social solidarity economy that includes territorial markets, direct relationships between producers and consumers, cooperatives and participatory community-led governance mechanisms and policies.

We are acutely aware, that many governments around the world reduce their funding to the UN institutions and that many of these, including the FAO and the CFS, are working under increasing pressure. We are also aware that corporations and philanthropic foundations take advantage of this situation by supporting UN programmes financially and thereby buying political influence. It is therefore no surprise that funding for social movements is dwindling and that our space for participation is shrinking. As a response, we commit to advance our efforts to mobilize resources and push governments to implement public policies that are rooted in human rights, in particular the right to food and nutrition, as well as the extension support for agroecological production.

We commit to building our food sovereignty movement and to empowering our front line communities to be stronger and take their struggles to all spaces where key political decisions are taken. To address the challenges we are confronting, we will continue to work with FAO, the CFS and the Convention on Biological Diversity and to work together in other institutional and strategic spaces, including the Human Rights Council and the Alternative World Water Forum.

Amandla! Awethu! – Power to the people!