This country item is part of the First Mediterranean CSA Mapping report generated in April 2016. 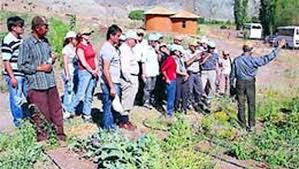 There are around 10 CSAs and/or Ecological Solidarity-based Partnerships in Turkey. The oldest is the Buğday Association Cumhuriyetköy Bahçe project, which started in 2005. The second initiative was Güneşköy Bahçemiz (“Our Garden”), created in 2006. There is no formal CSA network, but Buğday Association (Buğday Derneği) is the informal lead group. At present there are around 1,000 people who get a share from one of these 10 initiatives.

Due to the heterogeneous character of the terrain, farm/field size varies a lot from region to region and even within regions. There are more conventional monoculture fields than poly-culture farms. Villagers produce grains (mostly wheat and barley) in relatively bigger fields. In the Black Sea region, there are large areas of monoculture growing hazelnuts. The Aegean region is an important olive-growing area. The Southern coastal area grows a lot of citrus fruit, and central region specialises in grains. There is more traditional, small, poly-culture practice in the Eastern region compared with the West.

Industrial investments, mining projects, hydroelectric power stations, deforestation and depopulation of villages are serious and detrimental factors hindering the development of clean, ecological food production. Governments have constantly tried to reduce the rural population. The Metropolitan Law of 2012 cancelled the village status of thousands of settlements and turned them into districts of the central, metropolitan municipalities, with potentially very hazardous results for small farmers.

History and Characteristics of CSA:

CSA practices started with Bugday Association’s two projects in Istanbul, in 2005 and 2006, namely “Bahçe” (Garden) project. Participants made advance payments to receive boxes of vegetables grown on a plot. There may have been earlier attempts in Ankara by Hocamköy ecovillage initiative / Harman project, but this needs to be confirmed. This was followed by Güneşköy, another eco-village initiative in Ankara, that has replicated Buğday’s project and continued on a yearly basis since 2006, distributing about 50 boxes per week in the growing season. Similar projects were developed in İzmir (İmeceevi) and Çengelköy, Istanbul. In 2009, two initiatives emerged, BÜ-KOOP in Istanbul (a cooperative) and DBB group in Ankara as well as and ÇAYEK in Çanakkale (2013). DBB and ÇAYEK are all under the umbrella of PGS (Particpatory Guarantee Systems). BÜ-KOOP is similar to an eco-coop that provides logistics (a small sales room). DBB promotes the formation of small CSA groups, and there are a number of “community groups” working under DBB. In recent years, more and more CSA initiatives have been emerging, including those led by Yeryüzü Association (Yeryüzü Derneği) in İstanbul, and many small if limited groups around İzmir. Relatively recent producer-driven groups include Tahtaciorencik Village Ecological Living Collective (TADYA) in Ankara, and Bayramiç Yeniköy in Çanakkale.

What is understood as CSA in Turkey?

This is what the term CSA implies for Turkish volunteers:

There is also a traditional CSA-like system. Turkey is in transition from a more traditional, rural society to a more modern, industrial one. Many people in cities and towns retain their links with villages (parents, relatives, friends etc.). And those people in villages continue to support city-dwellers (mostly their close relatives) by providing them with fresh local food of all kinds. When people go to their villages, on holidays for instance, they come back with huge amounts of food. Or their relatives send them food with people travelling from their villages to the cities. Actually this is more like “agriculture-supported communities”.

Another form of “CSA-like initiatives” can be seen within companies or institutions. Sometimes a person tells his/her colleagues that there is good honey/hazelnut/whatever in her village (or somewhere else), and these people place a collective order, sometimes on a regular basis.

Which model is the most successful in Turkey?

To my knowledge, when producers or groups of producers take the initiative of creating groups (e-mail lists, Facebook groups etc.), they can reach more people. And when they provide easy ways to communicate product lists, placing orders and delivery, they can sell more. Pure CSA models like Güneşköy Bahçemiz, which were producer-initiated, also work very well.

How are the eaters’ commitments expressed or formalised?

In the Güneşköy Bahçemiz example, this was a simple one-page contract that conforms to mainstream CSA principles. In some cases there is no formal agreement; eaters sometimes contribute in advance to producer’s investment or other costs (many examples within TADYA) only on the basis of mutual trust.

Güneşköy Bahçemiz had organic certification. But in general this is not required at all., Although few in number, such initiatives in Turkey are based on mutual trust and close human relationships.

Almost all CSA initiatives value ecological production (no systemic chemicals, care for the health of the soil and environment, as well as other criteria).

“Natural production” is mostly understood in terms of traditional small-scale no-chemical production, free-range animals supplemented by naturally-grown, traditional feed. “Agroecology” is not commonly known; it is now being introduced. People refer more to (and apply) permaculture principles, holistic management, ecological gardening, Fukuoka style natural agriculture, etc. The Nyeléni declaration may not be not known, but its main principles are inherently present in most initiatives.

The CSA movement has recently been growing in Turkey. Initiatives have also started to come together, to learn from each other and to plan ahead. I expect an increase in the number of CSAs in the near future. The country in general is a very fertile ground for CSAs, with people in cities still retaining their links with their villages and vast amounts of clean, unused land and other agricultural resources.

What challenges are the initiatives in your country facing?

Not many young people living in villages anymore. Sometimes people from cities “go back” to rural areas and try to start small-scale farms. This is difficult because it can be hard to access a good piece of land, clean water, etc. Trying to learn agriculture from scratch also requires too much time and energy.

State policies in general seem to be designed against small-scale production, although some subsidies exist for organic production and for using environmentally-friendly methods. There is insufficient legislation to exempt small-scale producers from hard-to-follow regulations.

What means would be required for you to overcome these obstacles?

The creation of small-scale farms that exhibit economic success and also provide education and tutoring would be great. We are trying to create a pedagogical farm in Tahtaciörencik village. More grass-roots initiatives (in the form of CSAs or other LSPs) are necessary. We should try to encourage people to take responsibility for such solutions.