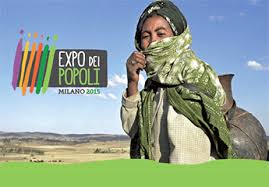 On June 3rd-5th, the People’s Expo, an international forum of civil society and peasant’s movements brang together over 150 delegates from all over the world in Milan. The main purpose was to assert the voices of peoples, in order to propose and illustrate best practices and alternative solutions put in place to cope with the global problems of access to food and natural resources. The governments and transnational corporations are grabbing the spotlight at the official expo and we must make the voices of peoples be heard through this important space.

The event was organized by the People’s Expo Committee, a group gathering 50 NGOs and associations of the Italian civil society together with international networks and peasant’s movements who operate on a daily basis in various areas such as: cooperation for development, environmental justice, human rights, organic production, critical consumption.

“This year, while the United Nations are setting the new Sustainable Development Goals and a new Global Agreement on Climate Change – explains Giosué De Salvo, the Committee spokesman- People’s Expo wants to seize the opportunity of the theme chosen by Expo 2015, to make the political agenda focus on the respect of human rights and the limits of the planet. The forum will give voice, above all to representatives of small-scale and family farming, excluded from the official Expo despite the fact they produce 70% of food consumed globally and are nowadays the main investors in agriculture.” As a matter of fact, it is at the People’s Expo that some of the world’s most important peasants’ movements will participate, including: La Via Campesina, the International Planning Committee for Food Sovereignty, the Terra Madre Network of food communities, the Global Call to Action Against Poverty and the Climate Action Network. Among them, the Urgenci delegation will represent the Community-Supported Agriculture contribution.

The intense three-day program included plenary lectures, a speakers’ corner where participants shared their own testimony and working spaces reserved for delegates. Many issues were be addressed during the forum: the promotion and support of agro-ecology and biodiversity conservation; the transition towards an oil-free economy; solidarity economy and ethical finance; but also issues of crucial importance for the more “vulnerable” peoples on the planet, as the impact of free trade agreements, financial speculation and land and water grabbing, which is the phenomenon of large-scale acquisition of land and water at the hands of transnational companies, foreign governments and investment funds that is damaging the rural economy, especially in the South, but also in Europe.