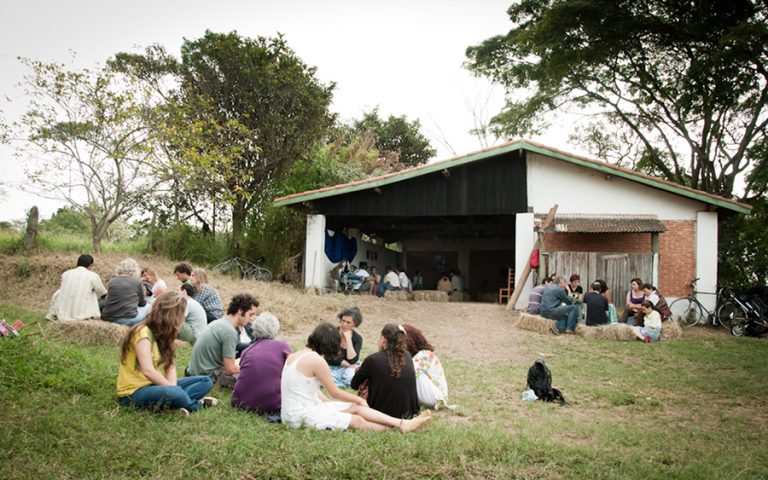 CSA Demetria as a pioneer project for CSA Brasil

The initiative for community‐supported agriculture exists now for about 3 years in Brazil. 12 km away from the city of Botucatu and 240 km away from the metropolis Sao Paulo the native born German Hermann Pohlmann initiated a project, which functions as a role model for other CSA´s in Brazil. It was founded in 2011 with five families and nowadays about 330 families are members of the CSA Demetria. In total, 1000 persons receive fresh and healthy groceries from 9 depots in 4 different cities. The members are provided with more than 400 so-called „Cotas“. A Cota forms one unit of 7 different products. It includes e.g. authentic buffalo mozzarella, which is produced directly on the Demetria by a Swiss couple. The farmer Marcello is responsible for the cultivation of 12 hectares together with five families in a biodynamical way.

Thanks to the CSA project, the financial situation of these families has been improved and stabilised. For example, within one year five new work places have been established. Moreover, the children of these families are now enabled to join the local Waldorf Kindergarten and Waldorf School.

What is special about the Demetria? During the 80ies the „Enstancia Demetria“ emerged, the first biological dynamical initiative in Brazil. The school of Rudolf Steiner was founded in 1984 on the farm and initially it was only intended for the children of the workers.

However, the school attracted more and more families from outside so that so-called „Condominios“ (colonies) were developed. Today the area includes about 6 condominios alltogether. According to the way it was created, the Demetria is no neighbourhood like any other in Brazil. In fact, it is a sort of „ecological oasis“: It is green all around; there are no asphaltic streets but a lot of small bike- and footpaths.

A few groceries for daily usage can be purchased in two small health-foodshops. Beside that, the „Associação Biodinamica“, an institute for biodynamical research on seeds, was set up. Not least because of this infrastructure it seemed obvious to establish a community -supported agriculture on this location. Many of the local families are already members.

What are the plans for the future of CSA Demetria?

Memberships are supposed to expand to 500, so that the agricultural business can be financed completely by CSA. Right now, half of the income is generated through sales on markets. Aside of that, the foundation of a kindergarten on the farm itself is planned, so that CSA can be combined with educational content.

All in all, it is of utmost importance for the cofounder Hermann Pohlmann to create a successful model so that further CSA´s can be established in Brazil. For this purpose, the „CSA Brasil“ -network has been launched (www.csaBrasil.org).

About the author: Johanna Abeln is currently working as the first German intern at CSA Demetria. After finishing her Master degree in „Sustainable Services and Nutrition Management“ at the University of Applied Sciences in Münster, Germany, she applied for an internship at CSA Demetria. This is a reasonable combination of theory and practice: working hard for the CSA during the morning, supporting Hermann in the project coordination and networking activities for CSA Demetria and CSA Brasil. If interested, more interns are welcome to take part in this project.