Learning from CSA pioneers: farming, rural development and cooperation with consumers from a Polish perspective 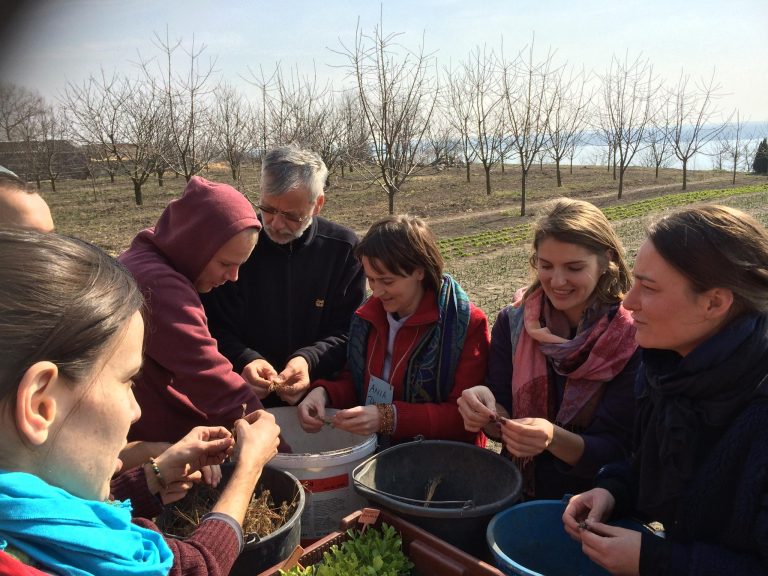 The 5th international gathering of the project „Learning Towards Solidarity-based Food Systems” took place in Poland between 19th and 22nd of March 2015. The event gathered 19 international guests from 7 different countries and another 9 Polish participants representing various initiatives in Poland and abroad. The aim of the gathering was to give an insight into a relatively young movement of Community Supported Agriculture and related initiatives concerning community and solidarity-based food systems.

The event started on the 19th of March with a shared dinner served by a vegan co-operative Margines. The dinner took place at the office of the Institute of Global Responsibility (Polish acronym IGO) in Warsaw, the local partner of the project. The guests were given a presentation of the work IGO does: it is an NGO which focuses on education, campaigning and advocacy work in areas such as global citizenship, human rights, equitable development and food sovereignty. One of the areas of its work is the issue of the right to food from the human rights perspective and the food sovereignty movement, especially in the Global South. The

ir engagement in the local food systems in Poland is a way of supporting community-driven alternatives to the corporate-dominated food systems, which leave people little choice over how the food they eat is being produced. Right after the dinner the group left for Dobrzyń nad Wisłą, a town situated 150 km north from Warsaw and home to the biggest CSA in Poland, currently supported by over 120 members.

The morning of Friday started with a very intensive session of presentations of initiatives of the guests. The session was opened by Barłomiej Kembłowski, our host CSA farmer from Dobrzyń nad Wisłą. In a short presentation he explained his life journey with farming and CSA. Although he comes from a family with farming tradition he chose a different path for his education. As a young graduate in Sociology he started his professional life in Warsaw, working for one of the supermarket chains. As a side project he started to grow and sell chili peppers at his family farm. Through his Facebook fanpage which shows his produce he managed to make contact with consumers in Warsaw. In 2014 a member of a Food Cooperative ‚Kooperatywa Południowa‘ approached him to ask whether he would like to grow vegetables for their members based on a CSA model. The experiment began. Throughout the whole growing season his family and his girlfriend – Adrianna Augustyniak were growing, picking, packing and delivering fresh produce to Warsaw. After a whole growing season of successful cooperation with over 20 families, he and his family decided to expand their activity. This is how farming became his full-time occupation and since the spring of 2015 their 4 hectare farm is able to deliver fresh produce to 3 different groups of over 120 families.

Because of the time restraints every participant had to present their initiatives in 5 minutes, using the Pecha Kucha format. Presenters showed 15 slides and had only 20 seconds to comment on each slide. Thanks to such a format everyone was given a chance to give a glimpse of their activity. The scope of presentations was very large: in addition to CSA projects the participants presented initiatives on urban gardening and farming, educational centers, food cooperatives, hydroponic food systems, rural projects in Africa, ethical consumption campaigns and research projects on access to agricultural land. Polish initiatives presented to the participants were: Food Cooperatives: Wrocław – Kooperatywa Spożywcza Wrocław, Warsaw – Kooperatywa Grochowska (which meets at at Centre of Local Activities, Community Garden „Różany Szpadel” and Community Garden run with a Tanzanian public school presented by Magdalena Jarocka.

he two hour session was followed by the practical session at the farm. First Bartłomiej showed the group around the farm, its cherry orchard and greenhouses, talking also about the historical background of Dobrzyń nad Wisłą. The town is located on a historical site, dating back to the 11th century. During the practical session in the garden the participants divided into smaller groups. Some of them were helping preparing pots for seedlings, some were de-hulling dill or making lettuce seedlings. One of the main attractions for the guests was a special device made on request for Barłomiej’s father, which is designed to prepare soil for growing the seedlings. See the photo below, because I am not sure about the English term for such a device. Everybody had fun preparing soil.

After the practical session came the time for discussion in groups. In the first discussion session the participants were divided into 4 groups. Each of the groups had a text which inspired conversations around subjects such as: communication of CSA to the broader public, creating a CSA network, internal communication between the farmers and the group and defining CSA as a movement. At the end of the discussion the reflections were shared with the whole group. After lunch and a short historical walk around the town it was time for the second discussion round. This time participants were voting for the subjects they wanted to discuss and could suggest their own topics. The discussion groups which formed around the subjects were: .”CSA – niche, complementary or full-time project? Consumer and farmer perspective”, „Identity with the movement. Convenient shopping/selling or activism? What approach prevails?”, „CSA network. How do we move up? Regional? National? International?”, „Processing CSA produce. Ideas for new ways of cooperation” and „CSA and capitalism”. After having talked and experienced about how to support agriculture we also wanted to take care of the aspect of ‚community’ of the CSA. To strengthen the sense of community among our participants we ended the day with an hour sport session playing volleyball.

Saturday 21st March started very early for the participants since the group headed for the ConferencePolish: „Dobre Żniwa”, (Engl. Good Harvest), organized by the association Ziarno (Engl. „Seed”) in Bończa. It is a yearly event which gathers organic farmers from all over the country. During the conference, LeTSFS participants Zsófia Perényi from Hungary, Vratislava Janovská from the Czech Republic, Danijel Baliban from Croatia and Jan Hendrik Cropp from Germany gave presentations about their involvement in community agriculture. Among many other topics the presenters at the conference covered the subject of: taking care of soil from permaculture perspective, good practices in biodynamic farming and education of future generations in organic farming. After the talks came the time for discussions in smaller groups. During that time the visiting farmers from Poland and participants of the projects had the chance to exchange their experiences. Some of the farmers were extremely interested in the subject of CSA as a brand new idea but for some it seemed too unrealistic to be put into practice. The questions that emerged during the session were about starting a CSA group, communication with the consumers, practical aspects of sharing the risk, and establishing prices for the produce.

Because the aspects of cooperation and building alternative economic models are crucial to CSA it was important also to showcase to our guests cooperative-run initiatives in Poland. This is why our dinner upon return to Warsaw took place at Kooperatywa Dobrze, a cooperative-run food store in the city centre of Warsaw; the accom

modation was organized in a cooperative-run hostel Emma. Thanks to that the participants could experience first-hand working solidarity-based alternatives in our country. Those who still had energy joined a benefit party organized by Kooperatywa Dobrze at the Squat Syrena.

Sunday morning was the day for reflecting on and summarizing our experiences. During a two hour session the participants filled in the evaluation questionnaires and there was time for discussion about the most interesting points of

the event and what could be improved for the future. After that we parted our ways hoping to meet again. In this blog post: “We, the Solidarity Food Movement”, you will find contacts to some of our activists who make the movement possible.

Report written as a part of „Learning Towards Solidarity-based Food Systems”, gathering in Poland 19-22 March 2015.

The project is implemented with financial support from the European Commission. The content of this document is limited to the author’s view, the Commission can not be held responsible for the information presented.