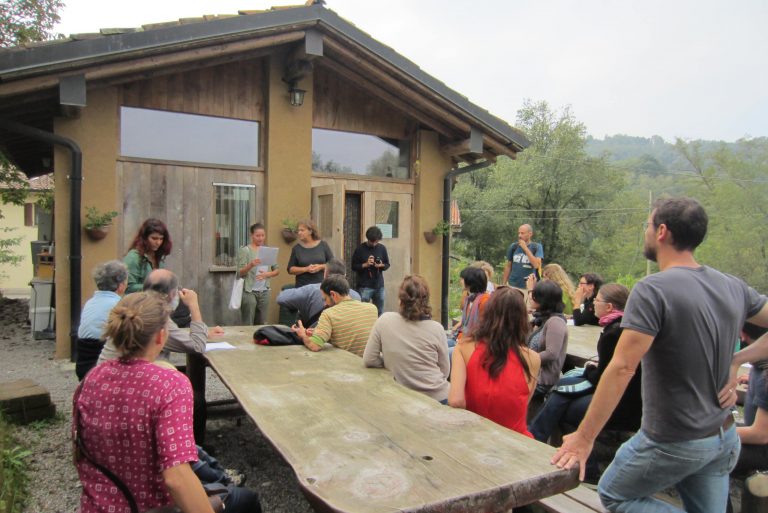 The Italian LeTSFS workshop started on Thursday evening with an aperitif offered by the Amici del Parco Trotter Association. The meeting point was in front of the auditorium (a former church) inside the park, where the participants could meet the organizers and their hosts, as family hospitality was provided by members of the association and of GAS (solidarity-based purchasing groups).

The following day the meeting was fixed at 8.30 in front of the park. After a breakfast at Mi casa toast bar the group leaved Milano heading for Bagaggera farm.

Bagaggera is an organic farm owned by a family which opened it up to social projects. It has 15 hectares of land planted with fodder plus some land dedicated to pasture and they’re breeding pigs, goats and chickens. They also participate in Spiga e madia, a project jointly developed by farmers and GAS consumers to produce and distribute bread made by locally grown and processed grain. They have a job insertion program for disable/fragile young people, named Corimbo, host woofers from around the world and collaborate with a GAS of about 100 families helping to run the hen-house.

After a brief welcome speech by the owner, the participants had the opportunity to take a tour of the farm. Led by Elia, one of the responsible for breeding, they visited the goat stables, the sty, the hen-house and the cheese laboratory where raw milk is processed to make goat cheese. The hen-house is an experimental project of co-management between farmers and GAS consumers. The hens pasture in the orchard by day and stay in the house by night, consumers take care of them during the week and can buy eggs at discount price in exchange.

After the tour the Spiga e madia project was presented to the group. It involves 3 producers, 36 GAS (500-600 families) and 5 bakeries in a 50 km radius territory. Bagaggera is both producing the cereal and baking the bread. A price above market level is paid to producers for the cereals and decision are take in in a collective way through regular assemblies of representatives of the GAS with the producers.

The lunch was made with products coming from the farm and is served by participants in the Corimbo project, 5 young people living in the farm who take care of the kitchen and breeding.

In the afternoon session Davide Losa presented the Cortocircuito project, which is consider the first example of a proper CSA established in Italy. Is a cooperative jointly founded by producers and consumers in Como in 2009. It aims at fostering sustainable consumption in the area and supporting short supply chains, providing tutorship to young farmers who want to move towards an organic production. In the frame of the project a Participatory Guarantee System (PGS) was put in place together with Varese and Brianza region GAS associations. The PGS is a bottom-up certification process which has been developed with the contribution of experts and the participation of the producers themselves and the consumers; it is meant to lead to an official guarantee mark of the CSA system which certifies that production system meets the requirements which have been jointly agreed by the whole food community, reinforcing mutual trust amongst its members.

After a discussion round participants proposed a small change in the program, postponing the next session to take a walk in the woods surrounding the farm. After an hour walking the group reached a pleasant meadow where a presentation round took place.

The group then left the farm to go back to Milano. The dinner was served at Villa Pallavicini, a place run by an association which promotes cultural activities in the same neighborhood as Trotter park with a special focus on promoting cultural exchange amongst different immigrant communities.

Saturday started with a workshop session amongst participants which took place in the Trotter park auditorium.

First Amit Moravchick, a GAS del Sole member, presented an administrative management tool he developed to help organising orders and payments in the GAS association. Is an open source tool which can be adapted to suit the needs of different kind of organisations.

Then the discussion session took place. Participants were asked to suggest different issues around CSA and to choose the most interesting to be discussed. The group divided in four and discussed the following:

The sessions achievements are avialable here.

After the session there was no time for a final feedback and the group had to move to visit Zac!, an innovative concept of Farmers Market (see more here) which takes place in a public park in Dergano neighborhood.

At the market there was some free time to buy food and talk with the farmers, then participants gathered for a picnic lunch on the grass.

After lunch the group met Lucio and other people in the organisation who explained how the market was born and how is developing and experimenting new ideas and collaborations. There is a core group taking care of the organisation and administrative tasks but the market has also cultural program with a main theme which is developed through laboratories and other practical activities. The program is jointly built with a group of associations through regular meetings. The associations participate in the market with a stand where they explain who they are and what they do and with the specific activities they organised for the market. One important point is that local authorities recognised Zac! as a project of public interest so they’re financially supporting it paying the prescribed fee for events run on public land.

After the meeting it was time to go back to Trotter park auditorium where a public conference took place.

The conference dealt with the building up of complex solidarity-based food chains involving more roles besides producers and consumers and was focusing on two projects which the GAS del Sole association is supporting.

The first is called SOS Rosarno and is supporting small scale producers in Calabria region (southern Italy) willing to become independent from the big distribution chain which absorb the majority of the production of oranges in the area. The project also addresses the problem of exploitation of immigrants working in the orange harvest, promoting regular jobs contracts for the workers.

The second project aims at building another supply chain for local bread promoting the cultivation and processing of ancient varieties of grains. It’s been developed by the solidarity-based rural economy district (DESR) of the agricultural park surrounding Milano and involves farmers, mills, GAS associations and bakeries in the area.

Following the conference an aperitif with cultural program was organized, with a live performance of a female chorus and a concert for voice and guitar. After the performance the group headed towards Cascina Santa Brera, which hosts Associazione Culturale Cascina Santa Brera, where was waited for dinner; participants could taste different kind of pizzas baked in the farm oven with local ingredients and stayed in the farm overnight.

Sunday Irene, the owner of the farm, presented Santa Brera farm activities and leaded the group in a tour of the farm.

The hen-house of the farm is organized with movable units which host the hens for the night; by day they have the opportunity to pasture in the meadow. The unites move each week in order to provide hens with new grass and insects; an electrified net is put in place every time to prevent escapes of the hen and attacks from predators.

After the hen-house the group visits the vegetable garden and Irene presents the project “adopt a vegetable garden”, a CSA-like initiative in which people of the neighborhood pay a share and have the opportunity to come to the garden and pick their own vegetables. Every month there’s a meeting between the farmer and the consumers to discuss about the evolution of the garden, plant new vegetables varieties, and share new recipes cooked with the products of the garden.

The morning ended with the evaluation session followed by the lunch. Afterwards there was some time for shopping in the farm shop then people moved back to Milano to start the journey back home.