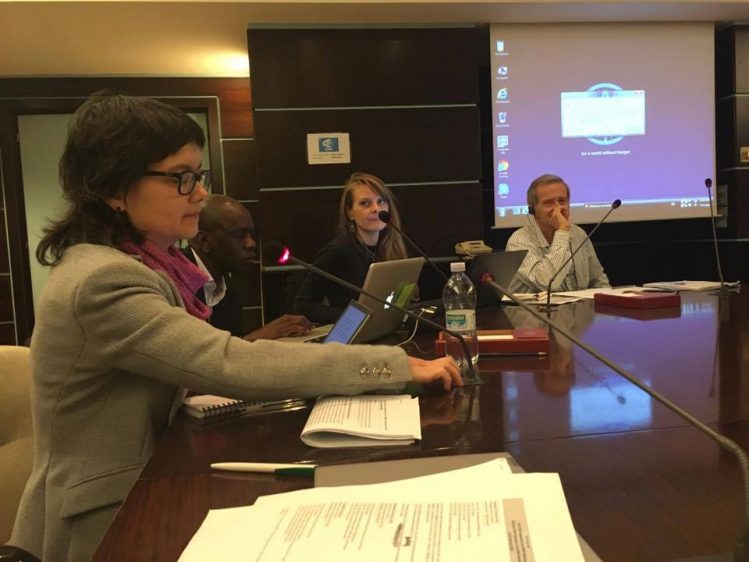 The Nutrition Group of the Committee on World Food Security (CFS) took place in Rome between the 21st and 28th of February. It was the meeting of the so-called “Open-Ended Working Group” in which the Member States as well as the Civil Society Mechanism and the Private Sector all participated.

The objective of the meeting was to work on the draft document drawn up by the Task Force (a technical group with representatives from various organisations), who were responsible for this work. The document includes the specific commitment of the Committee on World Food Security to the theme of Nutrition.

For the Civil Society Mechanism of which Urgenci is a member, this is a theme of fundamental importance, as although the United Nations recognises the right to food, this does not specifically include the right to nutrition. Furthermore, the solution that is being promoted by some Member States and the private sector in this field, consists of referring to “Nutritional supplements” or “Neutriceuticals” (health food products), in other words food that is wrongly called “fortified” with nutirtional supplements such as Sodium, Iron, Calcium… all of which open the door to GMOs as means of saving the world population from denutrition. In other words, a purely quantitative concept that has yet again been artificially created from an artificially productivist concept, and as a marketing niche and that in no way takes aspects such as biodiversity, culture, peasants’ and women’s rights or other aspects into account. .

For all the Civil Society participants it was crucial to achieve a proposal based on on commitments and work carried out upfront. This is why several earlier Civil Society Mechanism meetings took up this subject; they also held meetings with various Member States such as Brazil and Italy, who later indeed proved to be potential allies.

The approach that was taken by Civil Society was based on three aspects: the need to take a holistic approach to nutrition, the strengthening of Human Rights as a reference point for policy, and the need for the Committee on World Food Security, as the Human Rights’-based organisation of reference rather than the WTO, in order to achieve a coherent approach between the different aspects of scope and policies. This approach was presented by various members of the Civil Soceity Mechanism. The first and final interventions were made by the CSM representatives from the Consumer Constituency, Isa Alvarez for Urgenci and Marisa Macari for the Poder del Consumador.

Following the interventions, the position was supported by various States such as Brazil, Ecuador. Everyone, including the Chair of the Task Force concluded that the meeting had been highly satisfying. The final text that was negotiated will be published in the week of 28th April.