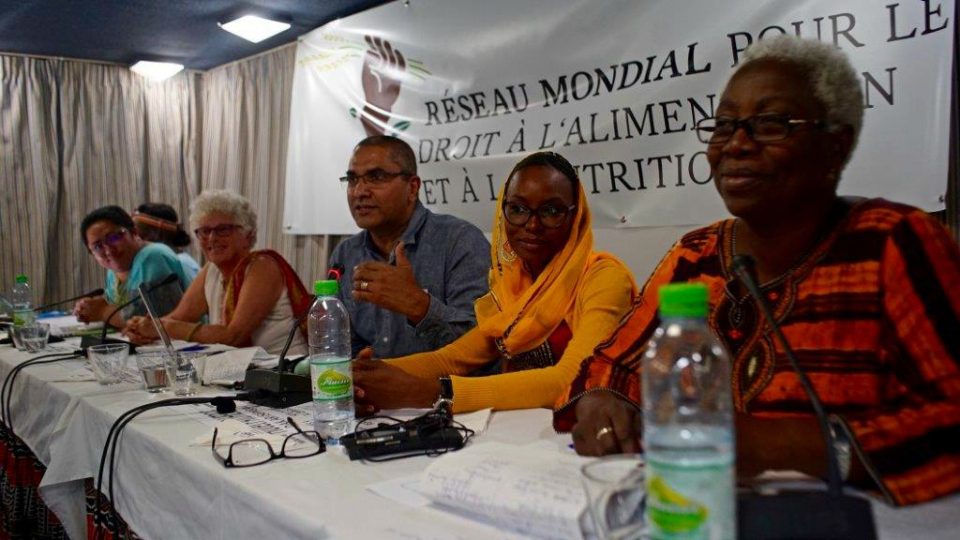 Representing more than 60 social movements and public interest civil society organizations, members and supporters of the Global Network for the Right to Food and Nutrition (GNRtFN), met in Dakar, providing international support to the West African Caravan for the Right to Land, Water and Seeds.

Civil society groups from around the world came together on March 19-22, following the     arrival of the Caravan in the Senegalese capital. In the view of Sofia Monsalve, Secretary General of FIAN International, this is not only a historic moment but also the clear proof that the struggles are deepening ties. “Using the image evoked by a peasant leader participant of our meeting, we are in a process where different progressive struggles are already converging like the tributaries of a river. This needs to be further encouraged as reconfirmed during our meeting of the Global Right to Food and Nutrition in Dakar,” she says.

As echoed by Judith Hitchman, representing the International Network for community supported agriculture URGENCI, this meeting comes at a time when neoliberal tendencies are increasingly gaining ground across the world, and continue to diminish the gains that the human rights movement has made over the last 50 years. “An increase in food speculation and insecurity, a surge in land grabbing and unfair trade rules at the WTO and agreements like EPAs, TTIP and TPP, are challenges for us ahead”.

Women’s and girls’ rights were also mainstreamed in the discussions. For Malyn Ando, from the Asian-Pacific Resource & Research Centre for Women (ARROW) in Malaysia, upholding and enforcing women’s rights needs particular emphasis, as women continue to have to fight patriarchy in every sphere of their lives. “This is also applicable to evolving customary tenure systems that secure women’s access to and decision-making over land, livestock and water,” she states.

Contributing to a     final declaration issued at the Network’s fourth meeting, the West-African Caravan, organized by the Global Convergence of Struggles for Land and Water, voices a strong call to realize a true Economic Community of West African States (ECOWAS) of the people.

“We will also denounce and actively oppose the criminalization of victims and defenders of human rights” says Massa Koné, from the Malian Convergence against landgrabbing (CMAT),an active organization of the Caravan. “This is strongly backed by the Network’s commitment to stand firm with fellow human rights defenders who are at risk for defending their rights to land, water, seeds, natural resources, and ways of life away from corporate capture.”

The Network, officially launched in June 2013, was the result of a broad consultative process that has taken into account the aggravation of the chronic world food crisis, including the persistence of gross violations of the right to food and the prevailing impunity of perpetrators. The network is about a joint struggle towards the full realization of the human right to adequate food and nutrition in the context of the indivisibility of human rights and people´s sovereignty, which can be traced back to the preparation of the Civil Society Parallel Forum ahead of the World Food Summit in 1996.

The Network is an initiative of public interest CSOs and social movements (peasants, fisherfolk, pastoralists, landless people, consumers, urban people living in poverty, agricultural and food workers, women, youth, and indigenous peoples) that recognize the need to act jointly for the realization of the RtAFN.

The West African Convergence Caravan for the Right to Land, Water and Seeds encompassed thirteen West African countries and marched between March 3 – 18th, mobilizing communities across the region on the road from Ouagadougou to Dakar, and stopping by Bamako. For more information, click     here.

For more information about the network, contact     secretariat[at]GNRTFN.org
For media enquiries, please contact     delrey[at]fian.org
You can find the declaration in     English and     French.