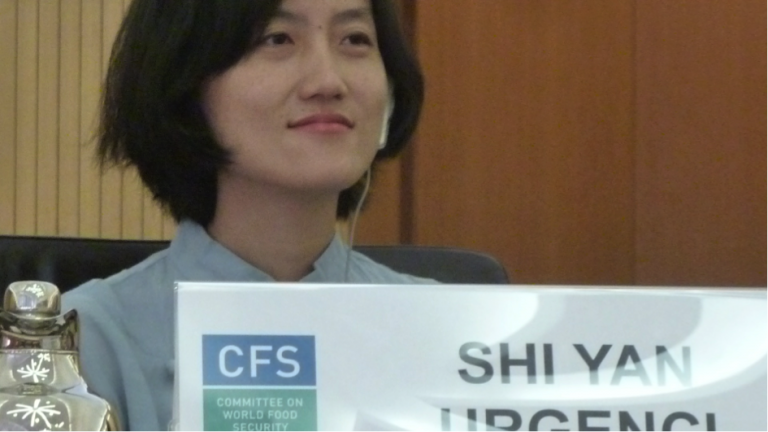 Shi Yan, Urgenci’s Chinese Vice-President recently played a very important role in a one-day High Level Forum on Connecting Smallholders to Markets organised by the Committee on World Food Security in Rome on 25th June. She was chosen as Discussant for the event. This allowed her to put social movements’ positions on how peasant agriculture can feed the world and more particularly the Chinese approach to Community Supported Agriculture clearly on the table. She clearly demonstrated how important it is to build real alternative local food systems that counter the system of industrial agriculture and imported food. This is a link to the event: http://www.fao.org/cfs/cfs-home/cfsevents/hlfsmall/en/

She began by pointing out that markets should be embedded in their social context. Markets should serve the people and help them to make a better living in their villages, and not just put the emphasis on urbanization as a development goal when making policy decisions. This is the embodiment of food sovereignty, and also takes up the principles of the Voluntary Guidelines of Tenure of Land, Forests and Fisheries, developed by the CFS with so much hard work by the members of the Civil Society Mechanism.

Shi Yan then pointed out that we need a framework shift:

It is not a question of linking smallholders to markets: 70% of the world’s food is provided by smallholders who also make the most important investments that smallholders themselves control, rather than value chains and supermarkets.

Public policy is mainly based on supporting the corporate food system. Shi Yan illustrated this by the fact by explaining that ten years ago, more than 70% of vegetables sold in Beijing were locally grown; they now represent less than 30%. Policies for subsidies, logistics, coolers, butchering etc. all benefit the corporate food system rather than smallholders.

“It is the smallholders who are rebuilding the rural economy: in terms of capital, land and human resources, as a farmer you live in the village and all three factors stay in the village. But as an entrepreneur, all three factors escape from the rural environment to the city”. This is a perfect example of how important it is to concentrate on rebuilding local food systems!

It is clear that we need more research on invisible markets, including on Community Supported Agriculture, as they actually play a very important role for both smallholders and consumers. We need more research, more attention, and more data.

The current market trend does not and can not provide good produce at a fair price to farmers; nor can it build trust between farmers and consumers. Cheap food policies make it hard for smallholders to survive in rural areas. They migrate to cities to find jobs as low-paid migrant workers, leaving their children and family at home. This is a global phenomenon. There are no more young farmers in the villages, and the remaining farmers use more and more chemicals to produce food. This causes food safety issues, as well as problems with soil and human health.

“We need a good market, one which can attract more young farmers who can take the responsibility of producing healthy local food”, said Shi Yan.

In China there is an emerging phenomenon of mindful markets based on approaches such as Community Supported Agriculture, new farmers markets and consumers buying clubs. Most of the farmers involved in these projects are young (around 30), and about 500 CSAs deliver healthy food, to more than 30,0000 consumers. They are rebuilding trust in food safety. Most of them use social media to allow consumers to see their produce. They are called the new farmers.

Other civil society panellists were Mamadou Goita of ROPPA in Mali, Chukki from India for the Via Campesina, Christian from South Africa who represented the fisher community. All made strong and convincing interventions that spoke of the need to place peasant agriculture and small-scale food producers at the centre of the issue of feeding the world in a sustainable manner.

Civil society messages were clear, and the previous day’s preparatory session where we all worked hard to make our collective message coherent and powerful really paid off. http://www.csm4cfs.org/news/csm_workshop_on_connecting_smallholders_to_markets-225/

The day was rather poorly moderated by the BBC’s Zeinab Badawi. She had little grasp of the background, or of the institutional UN approach of the Committee on World Food Security and Nutrition (CFS), and also failed to understand many of the real issues addressed, or the underlying tensions between the private sector and social movements within the Civil Society Mechanism.

Corporate green-washing, especially as presented through the Cargill case was unconvincing, and a fine example of how NGOs sometimes underpin attempts to use Corporate Social Responsibility (CSR). It was quite the opposite of all the case studies presented by civil society that were based on people taking things into their own hands and building their own solutions.

The key outcome for civil society is that there will now be an Open-Ended Working Group on the issue of Connecting Small-holders to Markets that will run until CFS43 in October 21016. Hopefully Urgenci will be able to make further valuable contributions through this group!