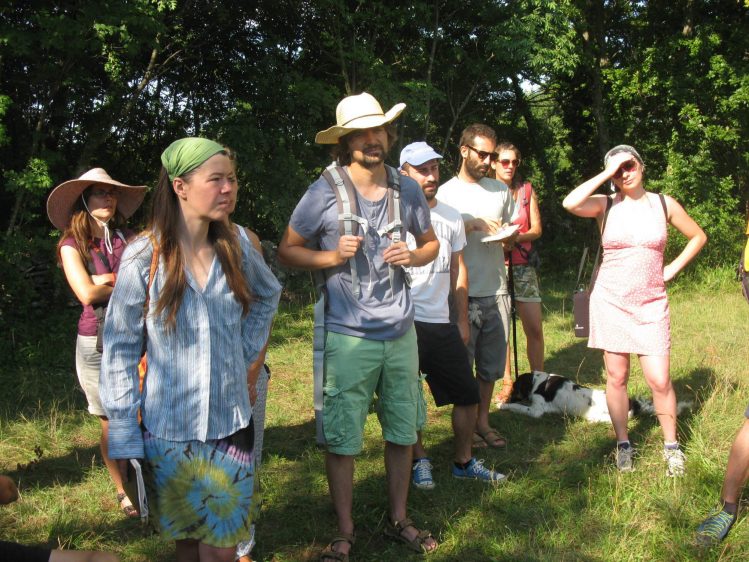 I was pleased with the diversity of all participants of the meeting. There were not just farmers, different CAS active supporters, NGO workers but also the future farmers for whom this meeting could be very valuable. We couldn’t have wished better combination of people for exchanging information.

The farms we saw were not alike the ones which are usually seen all over the Europe. They are owned by extraordinary farmers that do not treat agriculture as a way of making money but as the way of life. Their attitude and approach were a great inspiration.

One of them was fascinated not only with wild herbs but also with a nature and how to survive in it. Emir’s main goal is to make final products such as different essential oils and cosmetic only from his own ingredients. So it’s not only about growing herbs but also making oil, wax and so on. I can imagine this is demanding from the financial side as required tools are expensive. On the other hand this gives him certain quality of his products which he can be sold for higher price.

With another farmer, Damir, we found common language as for not reliable employees and other farm issues. Damir grows not only vegetables in a permacultural way but he also prepares his own seed. He has a pretty big collection of seeds.

Daniel has just begun his adventure with the farming and CAS system. He reminds me of myself at the same point of my life. He started with nothing and was responsible for every aspect regarding his project (such as growing and packing vegetables, administrative and so on). Although this activities are very time-consuming it is very difficult for a farmer to rely on somebody else to do his job.

My favorite farmer was a goat keeper. Her approach towards farming (and especially animals) is very emotional. She treats her animals as full-right inhabitants of the farm so they are not breed for meat. They just live there with her. She also started a very interesting project called a goat bank which functions in the same way as ordinary bank but instead of money it uses goats.

It was very good feeling getting to know different implementations of CAS system, how it works in practice and what challenges the farmers are facing. Not only from my point of view central and Western Europe is a bit ahead. All of us agreed that the biggest challenge is to make people understand and educate customers about what CAS is about. This is what Eastern Europe is lagging behind. To sum up it was great to see so many young people from all over the Europe that are highly motivated to make something for the future of the Earth (by supporting their farmers or even becoming one).

The overall picture from the meeting in Pula is that the CAS idea is not fully implemented yet and there is long way before us in order to make it working.