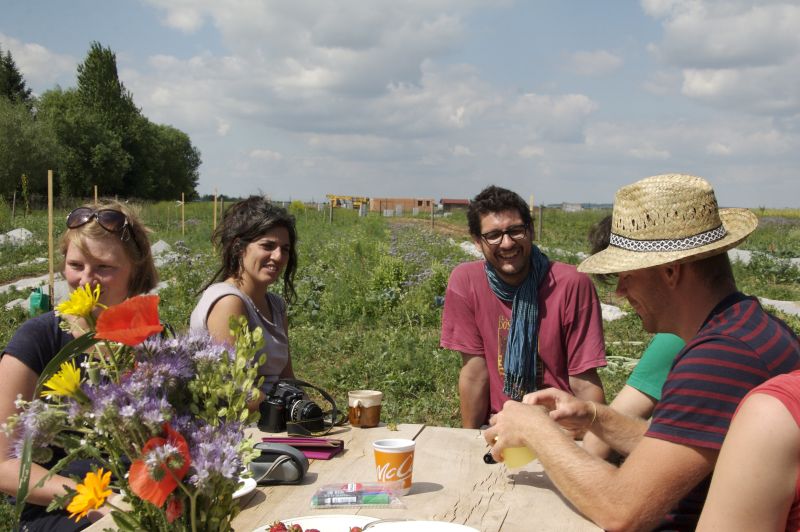 Solidarity-food Open space was an event organized within the framework of LetSFS international project in the Czech Republic on 13th to 16th of June 2014. The purpose of the event was to introduce the adult learners from partner countries in the community supported agriculture scheme in practice and then open broad discussion on the solidarity-food topic based on the Open Space technology, where the participants form the event programme and are at the same time lecturers and learners. The group was formed by 18 people from 7 partner countries. Among the participants there were farmers, members of CSA groups, urban gardeners and food sovereignty activists.

Day 1 of the event was focused on the socialization of the participant´s group after the arrival and a short city trip on the one example of urban community garden Kuchyňka, that has been founded on solidarity principles and is interesting by its location in the heart of capital city of Prague and by the fact that it is operated solely by the local community, the images from the visit can be seen here. The participants were also introduced in the solidarity-based systems in the Czech Republic which are mostly represented by CSA initiatives (around 20 in the country) in different forms.

On the second day of the event the whole group moved itself in the community market garden KomPot (abbreviation of Community Food in Czech) near Prague. KomPot is the first Czech community market garden based on the principles of CSA that is fully owned, operated and owned by a local community. It cultivates 6 000 square metres of former monocultural field and transforms it into community space and environmental friendly horticuture garden, based on the principles of organic farming, solidarity economy and community life. The garden is operated by ca 40 people that contribute to its operation by their own finances and time. The garden employs 4 people (2 gardeners for whole season and 2 seasonal workers) and produces all vegetables for 40 members for cca 6 month every year.

The participants spent on the garden the whole harvest day. They helped harvesting the shares for the members together with some of the members. Together we cooked lunch from the garden´s produce together with its members. Then we all have discussed in world café groups the operational details with the garden members Jakub (treasurer), Míla (gardener), Petr (coordinator of deliveries and beekeeper), Rasťo (beekeeper), Petr (chef) and other members. The participants and garden members shared their experiences in the field of financing such a project, involvement of the members or marketing and promotion of the CSA scheme. Project participants also cultivated one raised bed in the garden (image) and helped in preparation of shares.

In the evening the group of project learners moved to the local environmental centre Čabárna, which is a passive house with green roof located in a picturesque landscape close to the steel industry and mining town of Kladno. The wole group held a nice bonfire with everyone´s introduction to his own connection to solidarity-based food systems.

The third day of the event was devoted to the Open Space meeting during which 12 original workshops on various issues related to solidarity-based food systems ranging from the semantic differentiation of urban gardens and CSAs or involving elder people into SFS to technical points of distribution within SFS, adding value to the produce or local, national or European networking, were held. The whole report from all workshops is available here. The Open Space was accompanyed by two cultural breaks filled with common singing folk and various songs together and the evening was full of preparation and cooking of traditional italian Gnocci, that were delicous with various pesto made on the spot.

Final day of the event was devoted to the evaluation of the previous day programme and also to the excursion in the wildlife rescue station nearby. Afterwards the participants departed full of new inspiration and information back to their homes.