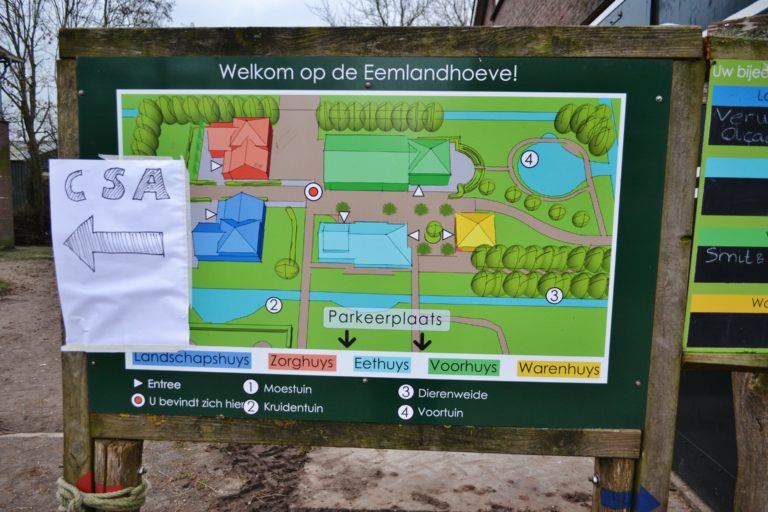 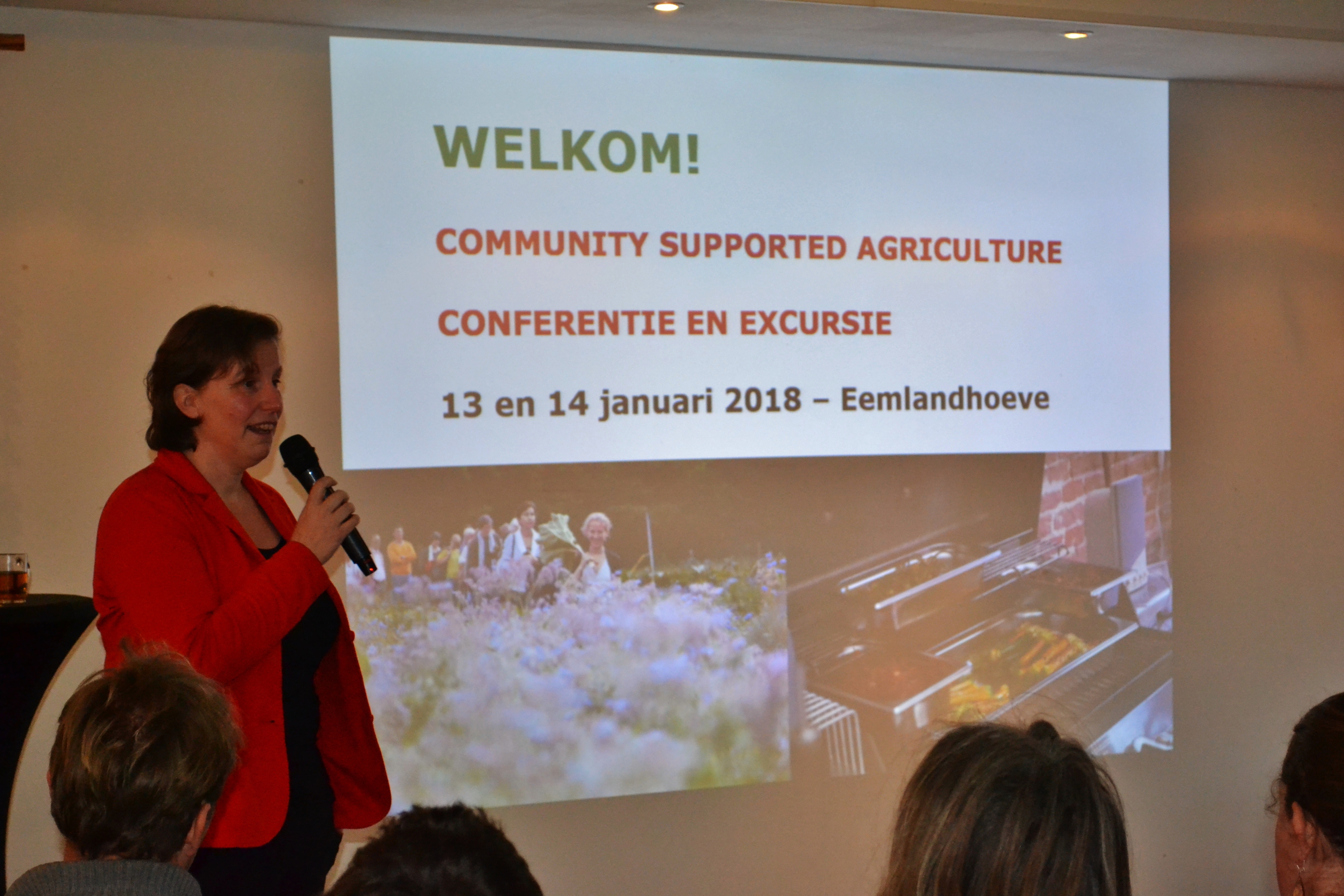 Every year either Netherlands or Belgium hosts the bi-national CSA Conference. This year it was held in Amersfoort, in the center of the Netherlands and close to several CSAs.

It was a fully sold out event (125+) with a plenary meeting, workshops, a meal and a movie and on Sunday we visited 2 local CSA farms. As always it is inspiring and uplifting to spend some time in the company of like-minded people.

Often our farmers existence focuses around our own plot of land and all the issues and struggles that come with being a very small scale farmer in an environment that is primarily dedicated to facilitate and promote large scale industrial agriculture. 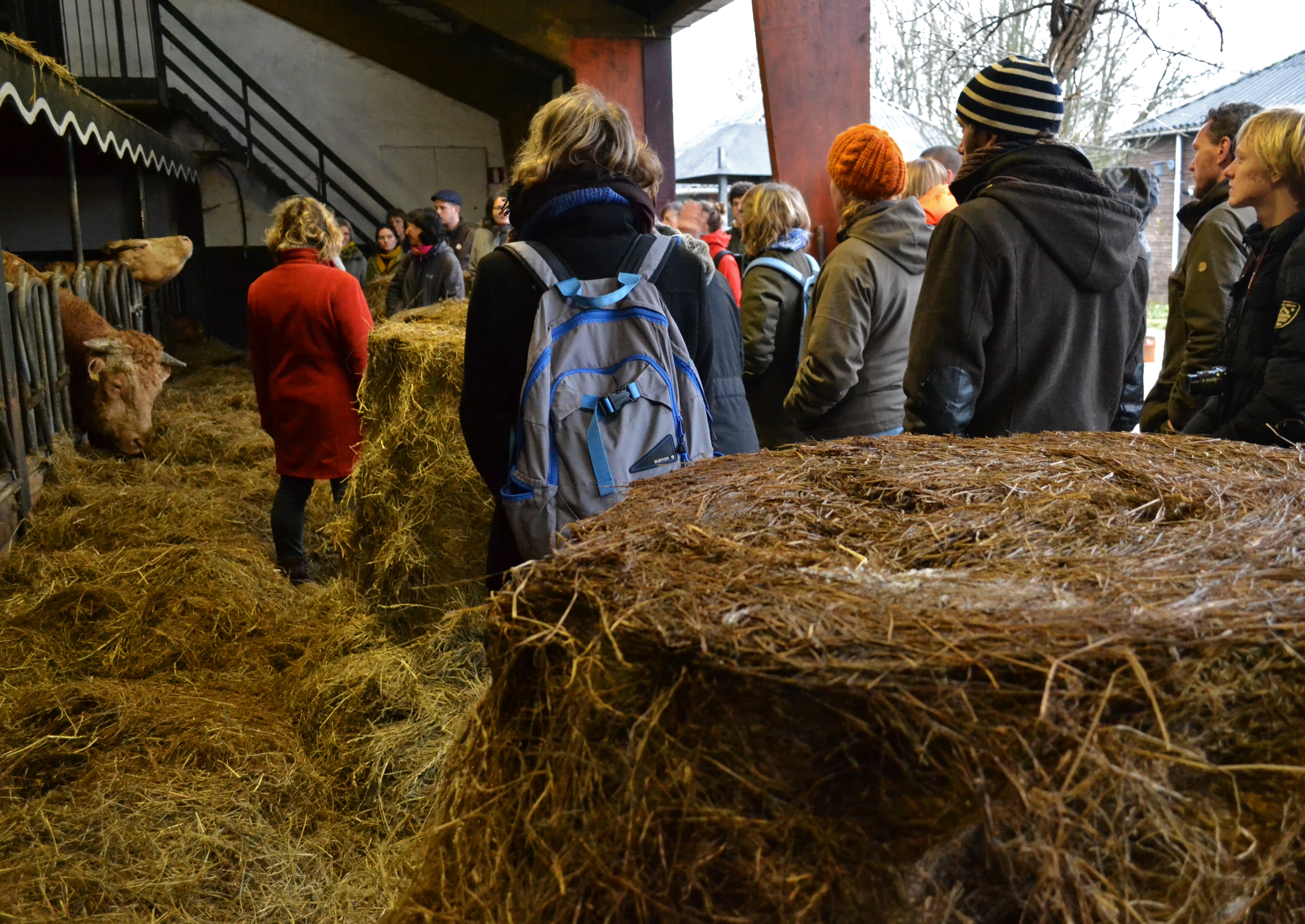 The plenary session of the conference was dedicated to the question ‘What is the added value of CSA to you?‘. On stage 3 farmers with varying years of CSA experience all stated that the direct contact and help of consumers is vital to the economic and emotional well being of both the farm and the farmers. All feel that this ‘alternative’ food system and striving to achieve food sovereignty is a logical and necessary step towards a fairer and more just world. But although we all agree that there seems to be growing recognition for the value of organic food from small local farms and on the many benefits of being more in touch with your food and where it comes from, we also all feel the pressure of land insecurity and the difficulty of finding enough members. Determining a fair price for our produce and negotiating with local authorities are topics that almost everybody present found seriously challenging.

A lively debate with the audience followed. Who asks what price for a share, and how much influence do the eaters have in this? Do we buy in produce during the hungry gap? Most farmers present indicate that increased commitment to the farm leads to better share prices; but all feel the pressure, and often this still not being enough. But is this really so surprising? Our culture places no great value on food and governments fail to recognize our farms as serious and viable enterprises? We do not profit from the huge amount of support that is available for large industrial farms, where sometimes over half of the income is derived from agricultural subsidies. 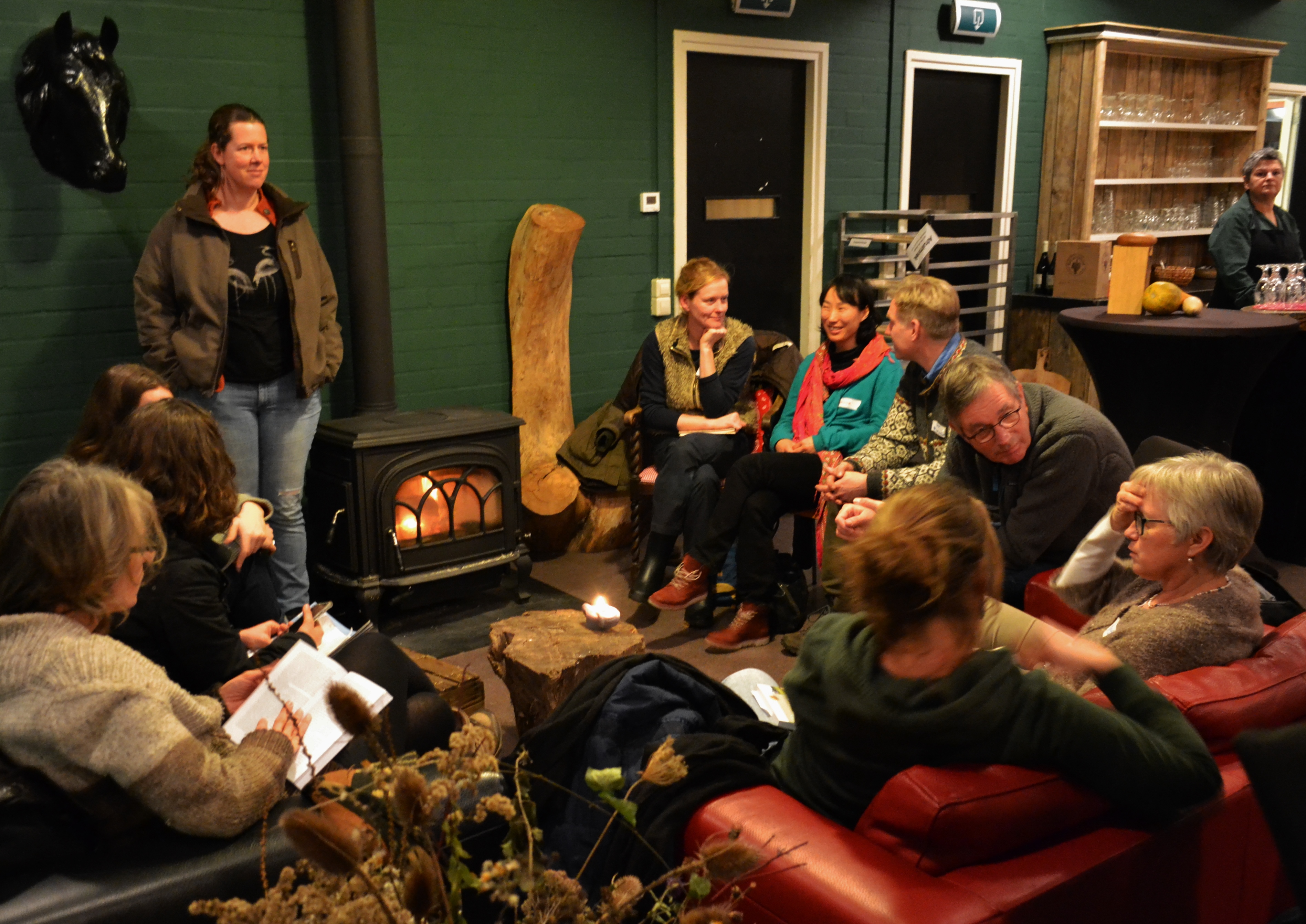 We all feel that we provide more value than ‘just’ good and fair food. We provide healthy, diverse and attractive environments. Not only in the ecological sense, but also in an emotional sense. This is is a feeling shared not only by the many happy eaters. In Netherlands eaters often harvest all their vegetables themselves; there are also the beneficial effects we can see for the ‘special needs’ people that take part in working in many of our gardens.

Most of us do not own our land outright and often have to deal with local authorities that usually have no clue about what to do with our kind of business. We do not seem to fit any of the regular moulds, and ask many difficult questions that nobody seems to know how to answer, or to whom to direct us. Initial enthusiasm for the general idea of what we do and the many benefits this has to local society dissipates when it turns out that we want more than a few square metres of land, and need certain facilities on our land to make the business work.

The Belgian delegation updated us on their current situation, and how their national CSA network helps CSA’s negotiate with local authorities and other parties. Also Dutch members in the audience called for the creation of a national CSA network to help each other negotiate the various challenges linked to setting up and running a CSA. Too many of us feel that we have to face most difficulties alone, and that we do not have enough knowledge and experience to deal with them.

There have been several past attempts to form a national CSA network. Until now they have not led to any concrete outcomes, due to the limited time farmers have and the different opinions on what defines a CSA. Possibly this time it will succeed. Several people have expressed their interest to set up a national network; contact details have been e 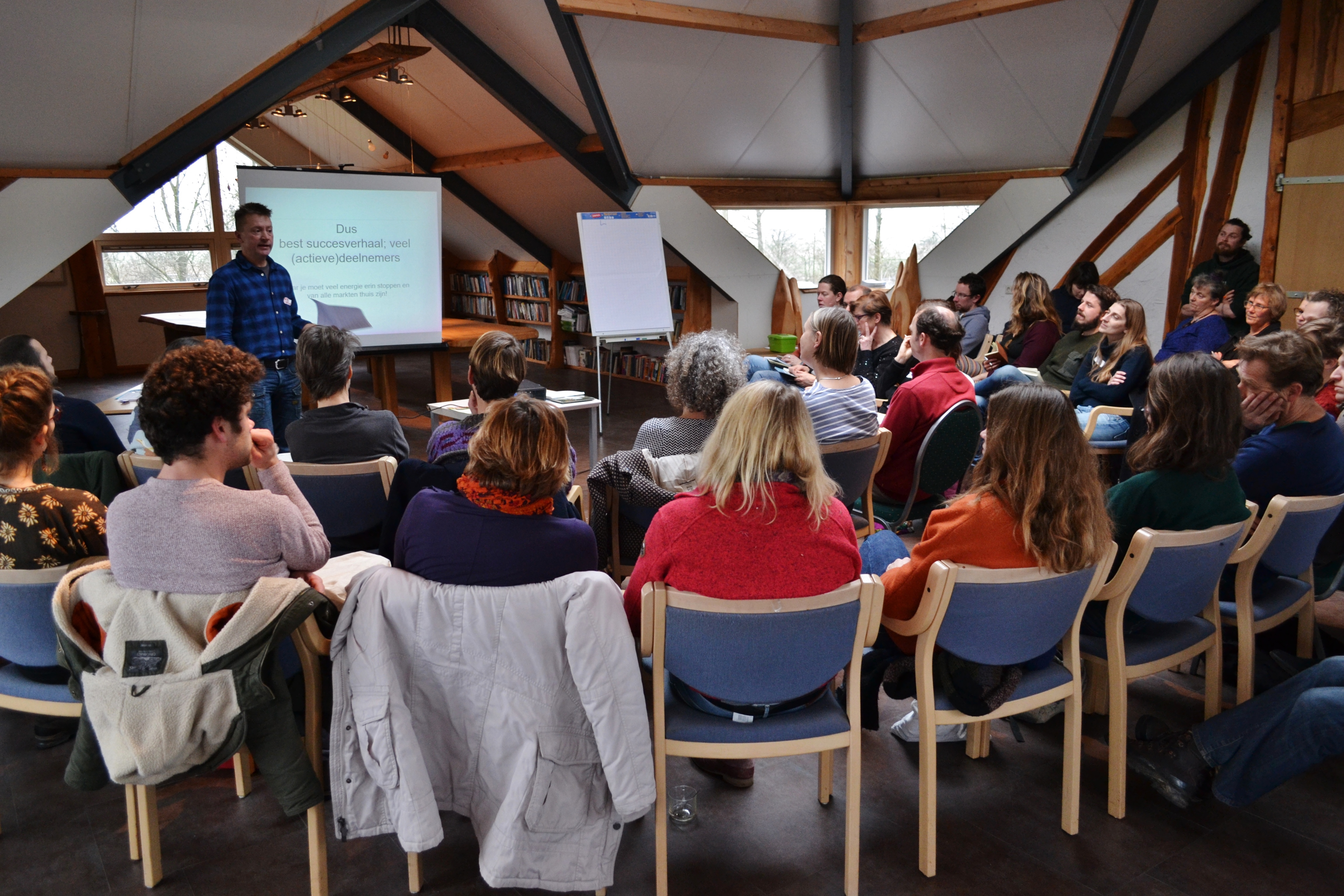 xchanged and a month after the conference, the preliminary network has publicly declared their intent. So far the signs are good and we are hopeful that this will provide a solid and fertile ground for further CSA growth, not only on our individual farms, but also in the wider arena of politics and public policy.

The afternoon was filled with a variety of practical, mostly farmer-to-farmer workshops on topics such as crowd-funding, community building, routes to market and interaction with local authorities. A wealth of tips and tricks was shared and although it was a very intensive happening in two sessions, everybody was inspired by both the content and the feeling of being part of a wider, very supportive community.

After the meal made from our own local produce and the beautiful CSA documentary film, HARVESTING HAPPINESS, made by Jildou Friso we made our way home. Almost half of the participants gathered again the following day to visit two local CSA farms: Eemstadboerderij in Amersfoort and Land In Zicht near Hilversum. There we finished with a wonderful lunch, after having made many new contacts, and feeling inspired and empowered to face another season of working very hard for little money but much reward.