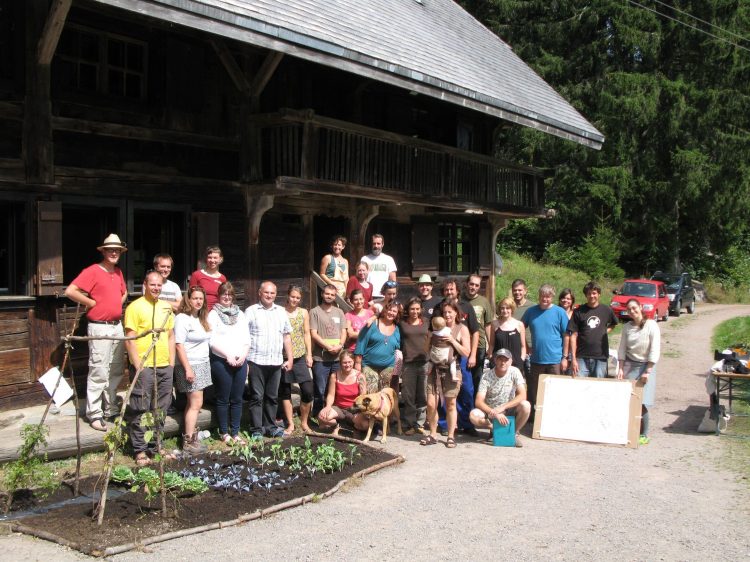 The European CSA Research Group meeting,  August 26-27 near Freiburg (Germany)
Report by Peter Volz, September 2015.
The Community Supported Agriculture (CSA) movement is being increasingly recognized for offering an alternative to the unsustainable industrial food system and thus a concrete approach in the transition towards agroecology and food sovereignty.

Out of 2 European CSA meetings in 2011 and 2013, a group of people that are involved in farming and CSA projects as well as in research have formed a “European CSA Research Group”. This group has met in Freiburg, Germany in August 2015 to organise a CSA overview report in Europe and agreeing on a common methodology in the framework of the “Common Ground for CSA in Europe” project.

28 participants from 21 countries came to the meeting. The meeting took place in the beautiful black forest close to Freiburg. It became clear that the context of farming is still very different in Europe but that the same threats to peasant farming exist. It became obvious that also the CSA solutions differ in various countries so that the meeting began – after a presentation of the participants – with work on a common understanding of CSA.

Here the definition:
« CSA is a direct partnership between a group of consumers and one or several producer whereby the risks, responsibilities and rewards of farming activities are shared, through longterm formal or informal shared agreement. Generally operating on small-scale, CSAs aim at providing quality food produced in an agroecological way. »
After this definition the frame of the research project was explained. This refers to the institutional background as well as the content and context. For this, organisers Peter Volz and Philipp Weckenbrock as well as Jocelyn Parot gave presentations on the project and its partners and funders, the concept of agroecology and the work of the international CSA network, Urgenci.

The meeting then went on to discuss the planned census and report.
To gather data for the census a questionnaire was developed that will be translated and distributed by all country representatives (1 per country) to all CSAs. On the basis of the Census, a coherent, well-informed image of the movement to other actors and institutions can be created. The census will be used to inform the report.
The “CSA in Europe overview” is the first effort of the European CSA research group that combines the knowledge of people at the crossroad of research and farming from about 25 countries giving us account of the dynamic movement of Community Supported Agriculture in Europe. This unique approach to research enables to get better insights into what has emerged as an alternative economic approach to agriculture.

Apart from presenting the results of the Europe wide census this report, due to be released in spring 2016, will analyse the agro-ecological dimension of CSA practice. Agro-ecology as outlined in the recent Nyéléni agro-ecology declaration outlines a common understanding of Agroecology as a key element in the construction of Food Sovereignty that goes beyond biodiversity on the field. It also addresses topics like territory, knowledge, politics and spirituality and poses an alternative to industrial agriculture and economic system.

The group worked hard in the full 2 days that were scheduled for this purpose. There were however enough breaks for informal exchanges, for walks and for the occasional dip in the nearby lake. Regional, organic food was cooked on site and there even was a party at the end of the meeting.
After this successful meeting the group is keen to finalize the census and report and continue to work on improving knowledge gaining and sharing amongst CSAs in Europe as well as informing the public and policy makers that there are existing alternatives to industrial food dependency.