Knowledge of Past Lives Can Illuminate Our Future 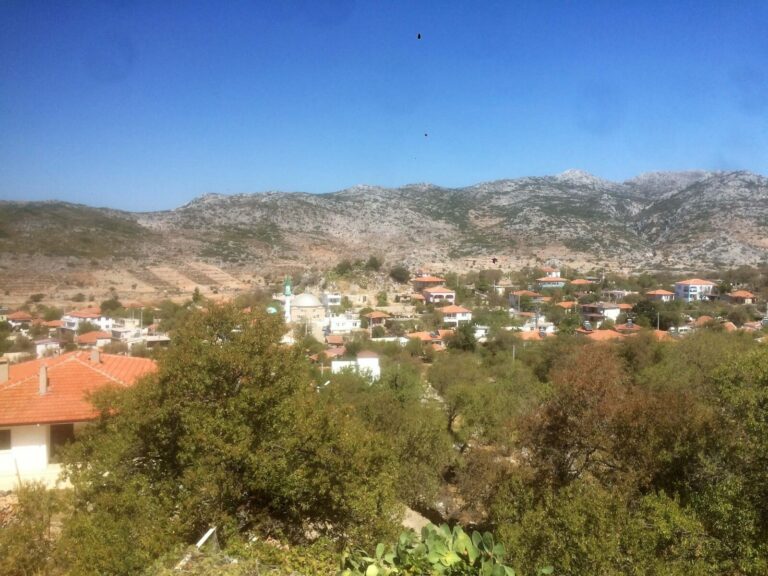 (Original article in Turkish by Oya Ayman, Member of the Strategy Board of the Bugday Association. The article: “Knowledge of past lives can illuminate our future ” was originally published in Yeşil Gazete.)

A handful of people maintain a culture shaped in harmony with nature in hidden geographies. On the one hand, they resist the pressure of industrialisation. On the other hand, they guide us to methods that can help us cope with the deepening food and climate crises. The residents of Taşlıca Village, to the southwest of Marmaris, have been living a self-sufficient life. They do so by coping with drought with the wells and warehouses they have built, agricultural terraces, alternating planting systems and durable local varieties.

The pages of human history are full of drought, famine, insect invasion and epidemics in different geographies.

The peoples living in the Anatolian geography have also had their share of these disasters and have developed various methods of coping and turned them into a tradition. However, these methods, which have been applied for hundreds of years, are about to disappear with the effect of urbanisation and industrialisation today.

But for those looking for a solution, there is always  an alternative.

While governments, academic circles, non-governmental organisations, companies, and individuals sensitive to climate and food crisis are working on sustainable models, a handful of people who maintain their culture shaped in harmony with natural assets in hidden geographies on the one hand resist the pressure of industrialisation , tourism, and construction and pollution.

But these days, they feel more pressure on their traditions. 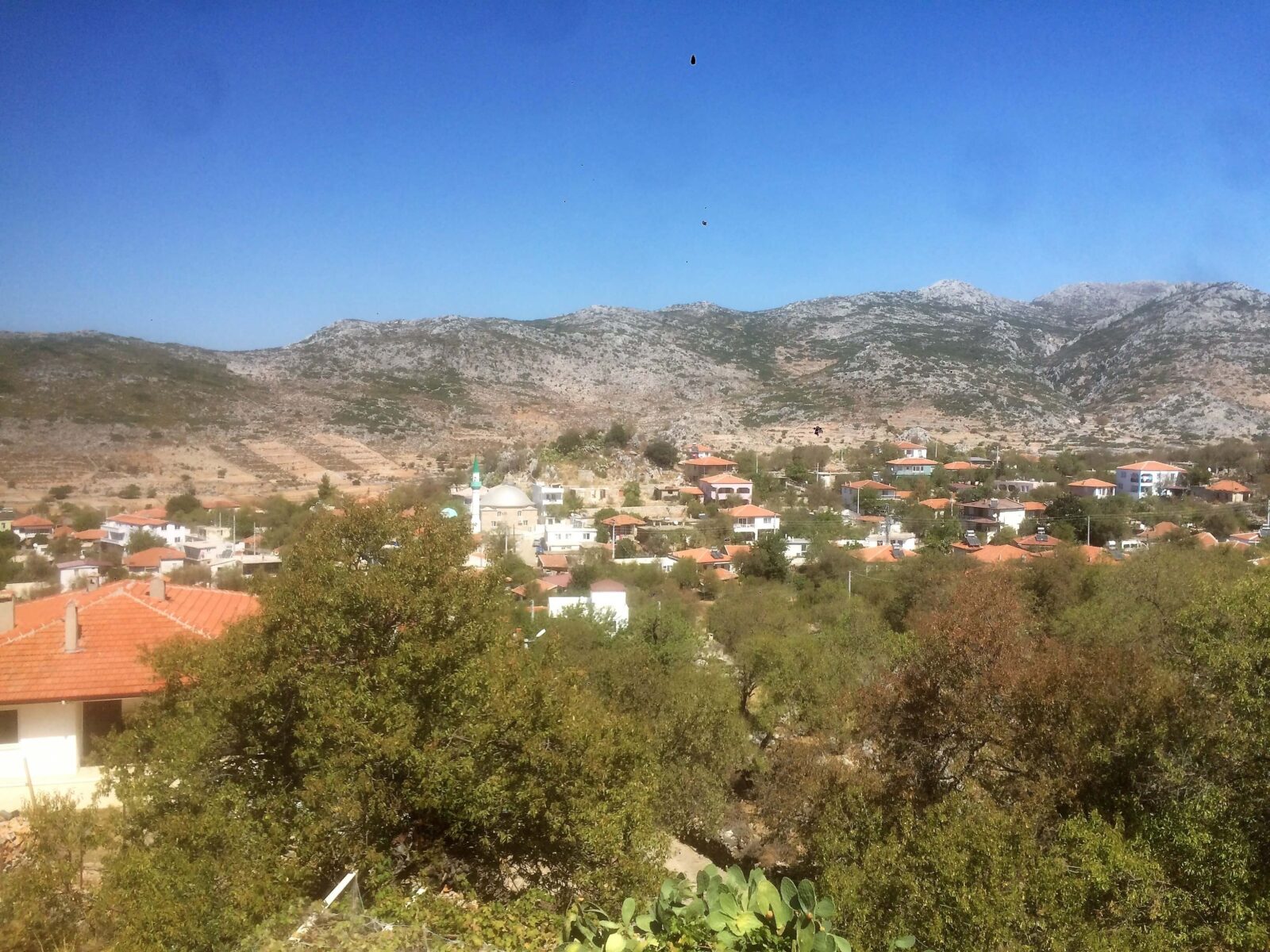 Taşlıca has been an uninterrupted settlement for 2600 years, from the Carian civilisation to the present.

The settlement, agricultural practices, and temple ruins that have survived from its rich past to the present. These practices are intertwined with the vital practices of hundreds of years of cultural accumulation. Water wells and cisterns carved into the bedrock, which have been used since antiquity, are still in use.

Erol Demircan, who is engaged in farming with ancestral methods on the one hand, and introduces the local culture to the guests coming to the village on the other, says, “These wells give us life as long as we know ourselves.”

In fact, all of them have drinkable water, but most of them do not prefer to use the tree roots that reach the water through the stone walls because of the odor. The water in the wells at a depth of 15 meters ends when it is used a lot, but after a while it is filled with water from the spring.

Water has always been very important for Taşlıca. Because they were constantly thirsty, they came up with their own solutions.

When the water they carried with donkeys was not enough, they collected the rain water from the roof in the cisterns they built under their houses. Although the infrastructure of the village’s water network was completed about 30 years ago, most continue to use the rain water they collect in the cisterns, because sea water is mixed with the mains water coming from an artesian in Söğüt town.

Erol Demircan’s wife, Zeliha, says they maintain the system they have been using for a long time: “After a while, the main water comes, fresh water runs out, salt water starts to flow from the fountains… That’s why we don’t trust the water coming from the mains, we use the rain water we collect ourselves. ”

Almost everyone in the village has a rainwater tank at home. In the past, five or six households used to collect water in cisterns, which they dug by collaborative work, and laid stones and plastered. Erol said, “Now you call the grader, it digs a hole. We lay locked stone inside and then insulate it with rough plaster. There is a 45-ton warehouse in my house. Wherever you look in winter, we use 90 tons of water. I know that I filled this cistern with rain two or three times…”

“I use rainwater from October to June . Then I fill up some tap water; they give it 3 hours a day too.”

He continued: “when the main water becomes salty in July-August, we bring water from Söğüt Village by tanker. Every year we go into the cisterns and clean them before the first rains fall. If there are cracks or problems, we whitewash with cement.”

The people of Taşlıca, who have been content with minimal water for centuries, grow drought-resistant crops like olives, almonds, figs, carob, karakılçık wheat, and grapes. It is a very rich geography in terms of local varieties. According to what the villagers say, 20-odd kinds of figs are grown in Taşlıca.

In the bakeries in the garden of the houses, bread and rusks from ancestral karakılçık wheat are produced. Almost every house has a goat, cow, or donkey.

The agricultural gate, which has been used since the Middle Ages, no longer closes.

The people of Taşlıca have maintained a self-sufficient culture for centuries despite the scarcity of water, stony terrain, and difficult geography. However, transferring this culture to future generations now requires more effort and awareness.

The words of  the headman of Taşlıca, Ramazan Çakır, give an idea about the effect of consumption culture on the village: “In the past, water was enough, but now some people want water in their house with a carboy. There is water in the well, they buy water with money. Some even don’t like the brand of the bottle that comes from Marmaris, let alone the well water.” 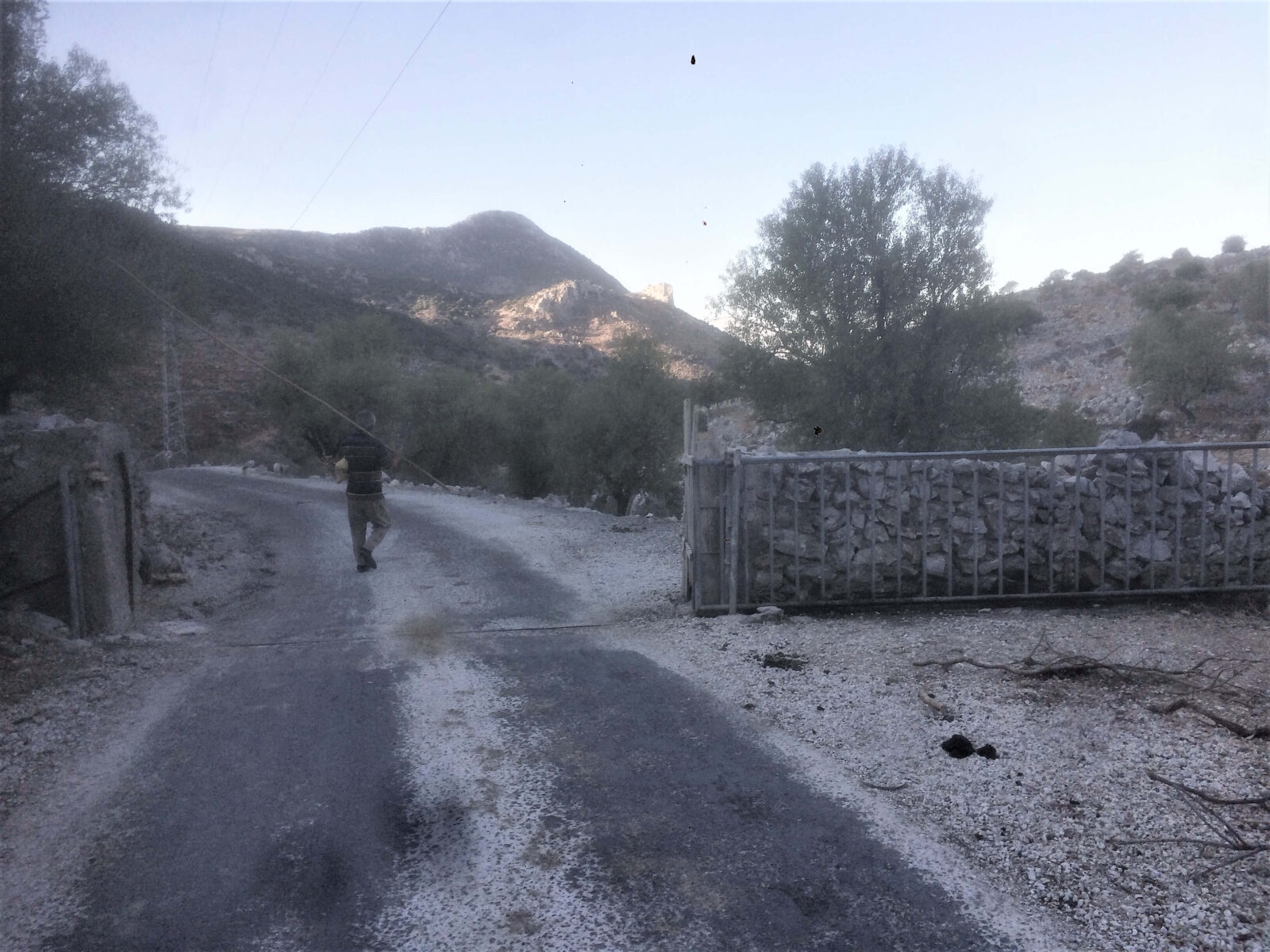 The only thing that has started to change is not the use of water. This year, for the first time, they had to give up the “door system” they have been using for animal and plant production for hundreds of years. The “gate” that separates the Sindili Plain in the south of  the village and the settlements in the north, as the locals say, has been closed for 300-400 years. In this process, the villagers who keep their animals in the Sindili Plain are farming on the lands in the north. Thus, the animals do not harm the crops. In mid-May, they open the door and release their animals.

This natural fallow and fertilisation method was not applied this year for the first time in hundreds of years. 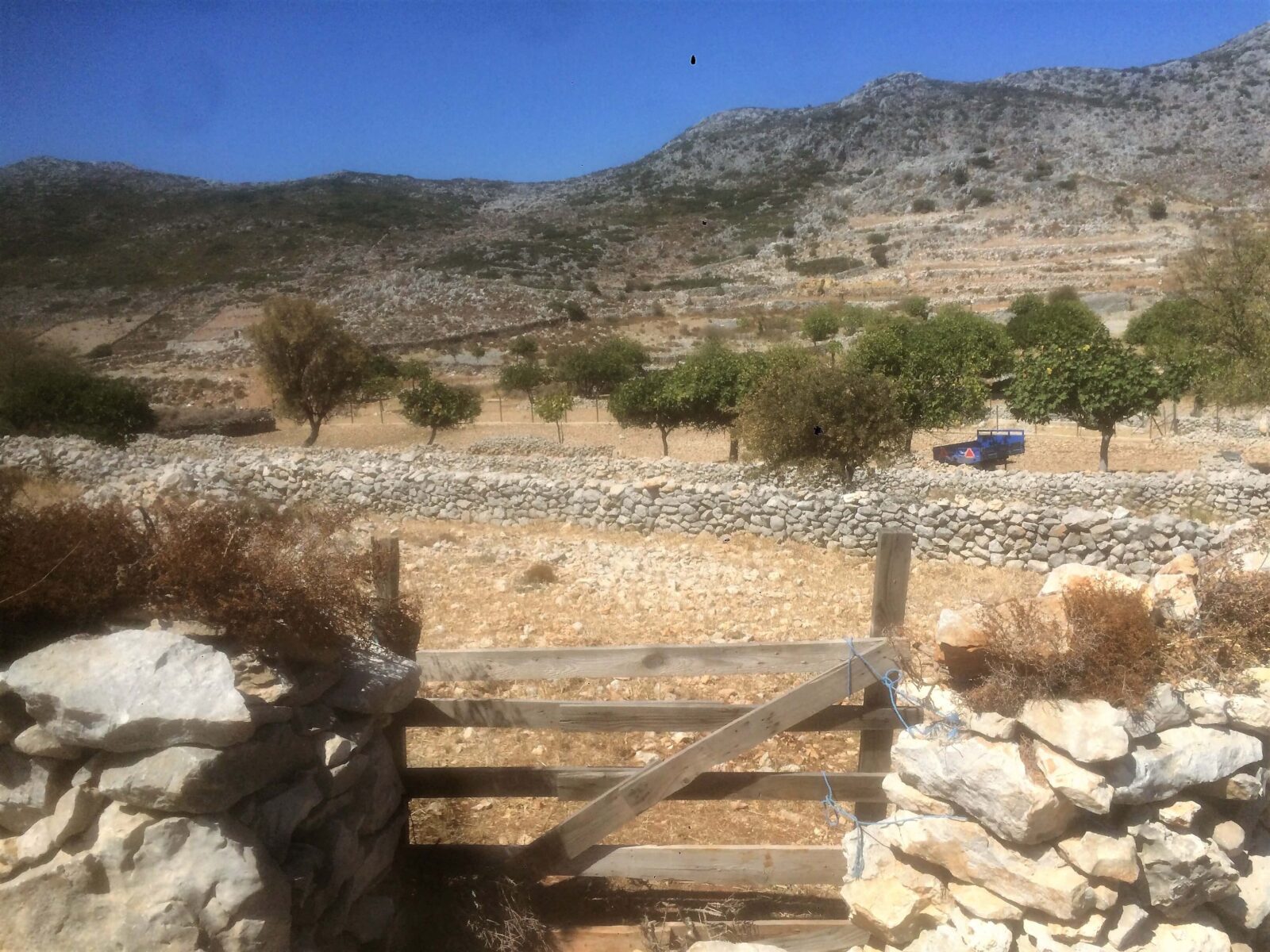 “Commonality is a beautiful thing,” says Ramazan Çakır, as he explains why they had to give up this system, which has been operating since the Middle Ages. “In the past, our ancestors used to do animal husbandry on the one hand and agriculture on the other. The current generation is breaking tradition. They didn’t listen to us. They said what would you do to my land?”

He is right according to the law.

“That’s why we couldn’t close the door this year. Animals still fertilize the fields, but when the door is open, they roam freely and damage the crops. That’s why we can’t buy more products in the current system. The earth does not rest either. Some villagers used artificial fertilizers and feed this year. We used to respect the custom.” 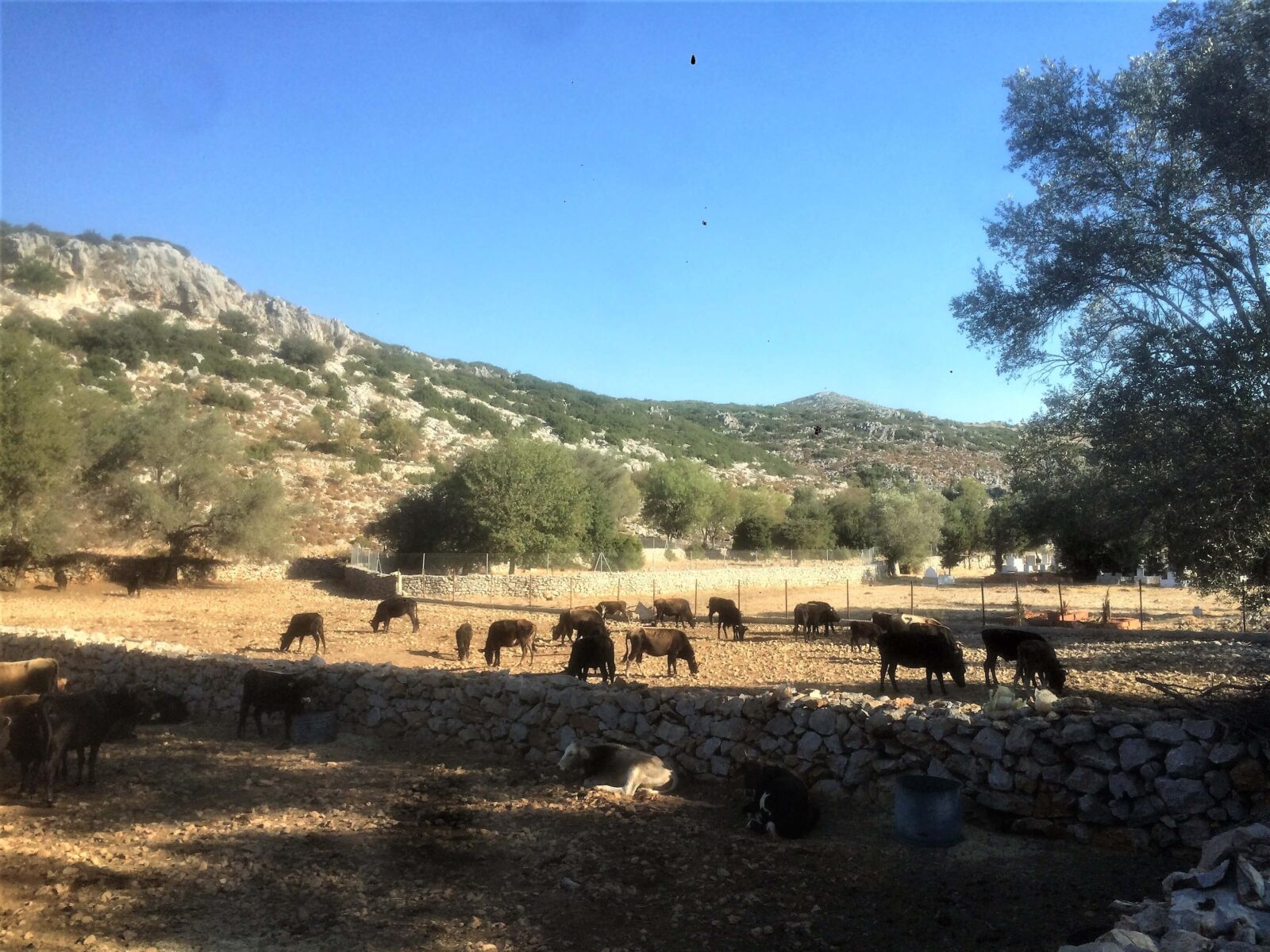 There are around 30 children going to primary school, but Taşlıca, like many other villages, has had its share of problems with the transport system.

Ramazan Çakır said, “When I was a child, they taught us agriculture at school. For example, I learned how to make an anchor in primary school. At that time, we used to sell the products we grew together and meet the needs of the school. Now, transportation is made because the students are insufficient, and children cannot learn the traditions when they are like that.” 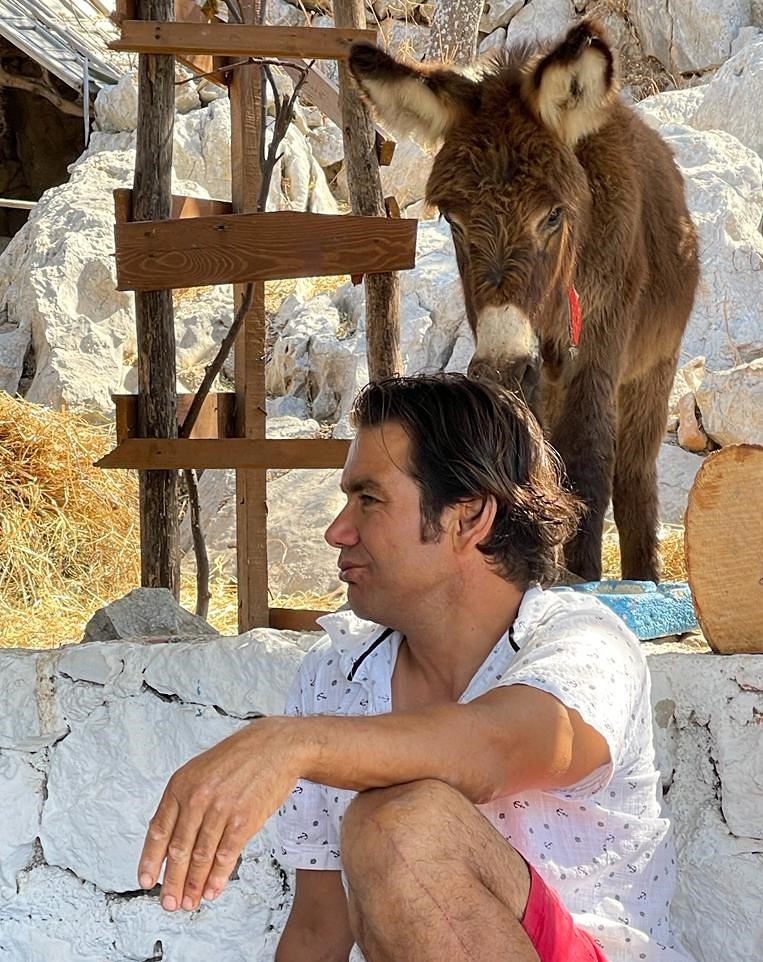 The residents of Taşlıca, who noticed the cultural erosion and ecological extinction early and took action, are making an effort to maintain their traditions.

Those who come to this small village, a few kilometers from the holiday resorts where the consumption frenzy reigns, proudly talk about the local seeds they keep, the fig varieties, the goats, the story of their rusks, and the rituals performed at the water wells.

Together with his wife Zeliha, we present our natural and local product diversity to future generations; On the other hand, Erol Demircan, who strives to convey this to those who come to his house or shop from the stall he has set up in the Marmaris market, says:

God give me strength, I will bring this village to the place it deserves…”