Renewal of contracts in Ile-de-France AMAPs: understanding an unprecedented situation, a reflection of a society in health crisis 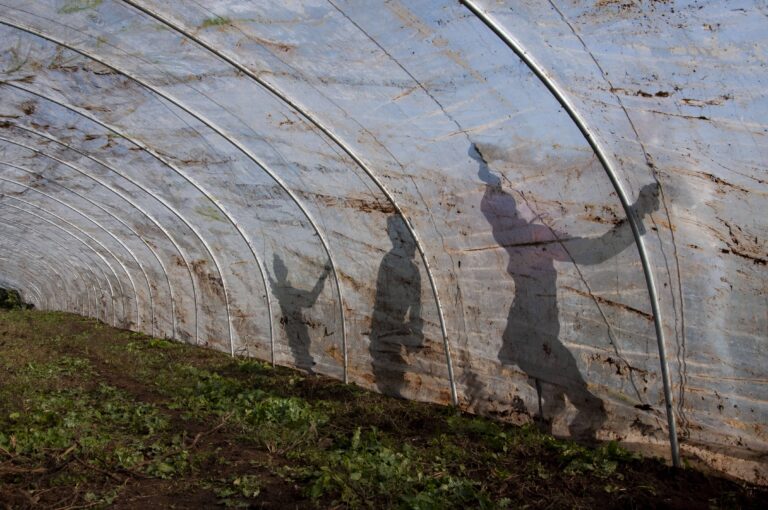 For several months now, members of AMAP’s and farmers in AMAP have been noticing that it is more difficult than usual to reach the number of contracts necessary to guarantee the sustainability of the farms. In order to better understand the situation, the first step is to put it into context and analyse it.

First of all, the AMAPs are not the only ones to note a change in the food consumption habits of the French. The sale of organic products in other marketing channels is also declining, whether in supermarkets, specialist shops or markets.

As of June 2021, organic sales in supermarkets were losing momentum, while the average basket was increasing in specialised shops, which were experiencing stable patronage. 1 While supermarkets are used to double-digit growth in organic sales (e.g. +22% in 2019), organic sales fell by 1.3% in the first ten months of 2021. 2 Since September 2021, specialised shops have also seen a contraction in sales. The decline in sales of organic products should be seen in the context of the economic situation of French households, which are facing high inflation and a decrease in their purchasing power.

The particular situation of AMAPs

In this context, over the course of a year, AMAP members and farmers benefit from greater stability. In an AMAP, we commit ourselves over a year to buying our farmer’s share of the harvest at the price he or she has set on the basis of production costs. The members are therefore not subject to variations in their expenditure on fresh produce from one month to the next depending on changes in market prices. Once the contracts are signed, the farmers are sure to sell their produce, since it has already been sold.

There is, however, a challenge at the time of contract renewal: it is essential to reach the number of baskets that corresponds to the production of the partner farmer.

In 2021, some AMAPs have seen a higher number of departures than in previous years. Although this model is the most reassuring for producers and consumers, it is also suffering the consequences of a health crisis that is disrupting the whole of society.

In Île-de-France, it is difficult to say exactly how many AMAPs would be affected by a drop in membership. However, practically all the AMAP members or farmers with whom we spoke shared their fears or real difficulties on this subject. The number of missing members varies between 20 and 30% depending on the AMAP, and up to 50% for some AMAPs. It would seem that Ile de France is not the only region affected, as other AMAP networks are also making the same observation.

The insufficient number of contracts does not always mean that farmers are leaving. In fact, it can be explained by changes in the contract (change to a half basket or delivery every other week).

Although some of the departures have been filled by the waiting lists, many AMAPs are still looking for members and are worried about the next renewals because they are starting with an empty waiting list.

It would seem that a number of AMAPs have been surprised by the lack of members they are facing. Indeed, this phenomenon also affects AMAPs that historically have never experienced difficulties, with some having a majority of members who have been there for years. Since the few places available were filled by “word of mouth”, these AMAPs were not used to communicating widely. In comparison, some AMAPs, especially in rural areas, are more used to reaching the required number of harvest shares late. They are therefore more used to setting up actions to find new people.

The current situation of the AMAPs in Ile-de-France must be studied by integrating the impacts of the health crisis (and the measures put in place to respond to it) on the life of the AMAPs. The years 2020 and 2021 have been particularly difficult for our movement, which has been able to demonstrate its reactivity and adaptability in order to continue distributions against all odds.

However, the AMAP volunteers had to dedicate their forces to logistical issues in order to maintain the distributions despite the measures (curfew, closure of the distribution site, health pass etc.). Many convivial times had to be postponed or cancelled.

Beyond the fatigue of the members faced with the follow-up of the logistics of the distributions, in 2020 and 2021 the AMAP could not be the place of meetings, exchanges and sharing that we defend.

The results of the questionnaire: why do farmers decide to leave their AMAP?

A questionnaire was launched at the end of December 2021 for farmers who were leaving their AMAP to find out their reasons for leaving. In one month, we received nearly 400 responses. Here is the first information that we can draw from it.

Compared to the number of AMAPs per department, the distribution of responses by postal code suggests that the AMAPs in Paris, Seine Saint Denis, Hauts de Seine and Seine et Marne have lost more members than the AMAPs in the other departments.

Repartition of respondents by departement

Moving house is the main reason for leaving, accounting for 30% of responses.

This result reflects a significant population movement among the AMAP members, which would explain the “unprecedented” lack of members that some AMAPs are experiencing. It is possible that the health crisis may have accelerated these changes in life.

However, the questionnaire does not allow us to know whether these people are moving to a nearby town, another department or another region.

In any case, we can say that this result is “reassuring” since it does not concern people who leave their AMAP because the model does not suit them.

A question of time and availability:

Unavailability at distribution times and lack of time to manage the basket are the 2nd and 3rd reasons for leaving.

Availability at distribution times is largely due to personal or professional factors (change of job, travel time from work, children to manage, etc.). For the AMAPs, there is often little room for manoeuvre in terms of distribution times or access to the premises, which also depends on the farmers or the availability of premises.

However, certain practices can make life easier for the members. It would be useful to promote and organise co-panning for people for whom it is difficult to be available every week. Some AMAPs have set up a map of their members (with their agreement) to make it easy to identify which members live nearby and ask them to collect their baskets when they are not available. Concerning the lack of time to manage the basket at home, sharing quick recipes but also advice on the conservation of vegetables could help some members who discover certain vegetables.

The contents of the basket:

Finally, the content of the basket represents a significant part of the answers (20% of the answers). The written comments show that the dissatisfactions linked to the basket are extremely diverse (lack of diversity in the vegetables, lack of choice, insufficient quantity in relation to the price, vegetables in poor condition, storage difficulties etc.). This shows that it is necessary to strengthen communication and education with the members on the content of the baskets.

A difference in the reasons for leaving depending on the territory:

The analysis of the first reasons for leaving by department reveals a difference depending on the territory:

– In Seine et Marne, unavailability at distribution times and lack of time to manage the basket represent 40% of the main reasons for leaving.

– In Hauts de Seine, unavailability at distribution times and lack of time to manage the basket represent 35% of the main reasons for leaving and moving house 29%.

– In Seine Saint Denis, moving house and lack of availability each represent a quarter of the responses. The volume of the baskets is too small and comes in third place.

Other elements mentioned in the responses

Finally, the written comments were analysed to see which elements were repeated. Here are the other reasons given in the 102 written comments analysed. These are secondary starting factors that do not allow us to conclude trends, but which are interesting to study in order to see how to create the conditions to allow the shopkeepers to stay. 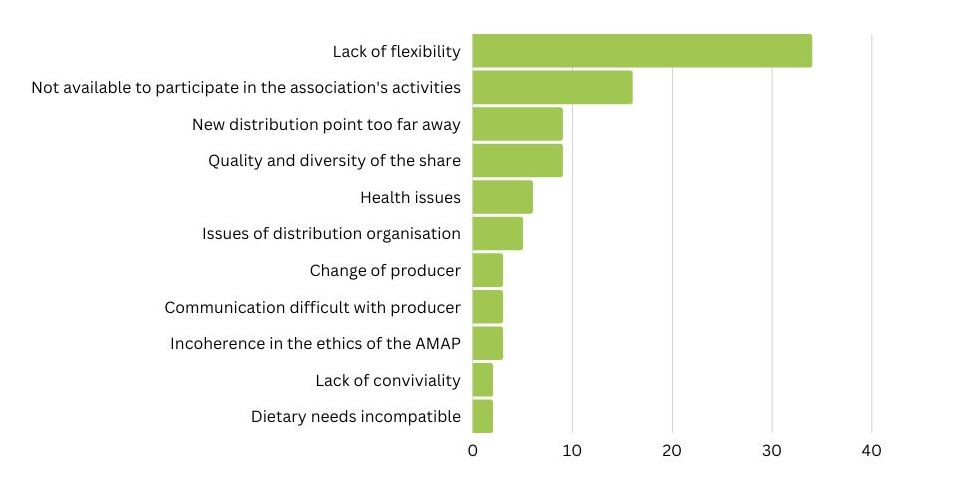 Behind the “lack of flexibility” lies a wide variety of feedback. While some respondents are not ready to accept the basic operating principles of the AMAP model (annual commitment, basket content based on harvests, etc.), others mention needs to be able to continue their AMAP adventure.

For example, a system of co-panning organised by the AMAP, an e-mail list of intermittent workers who can buy a basket in case of absence, a system for donating baskets that are not collected to associations, a longer distribution schedule, the search for a replacement in case of moving, etc. While some people occasionally accept losing their baskets when they have not managed to organise themselves, for households with lower incomes, these lost baskets quickly increase the cost of the basket over the year.

This initial analysis allows us to identify the factors on which we cannot act (moving), and those on which we have room for manoeuvre by reflecting on our organisation and strengthening our communication.

Now that we have some insight into the perception of our model and the reasons why some people choose other alternatives, we need to exchange ideas and equip ourselves to meet our future members, but above all to welcome and support those who are already here to enable them to stay.