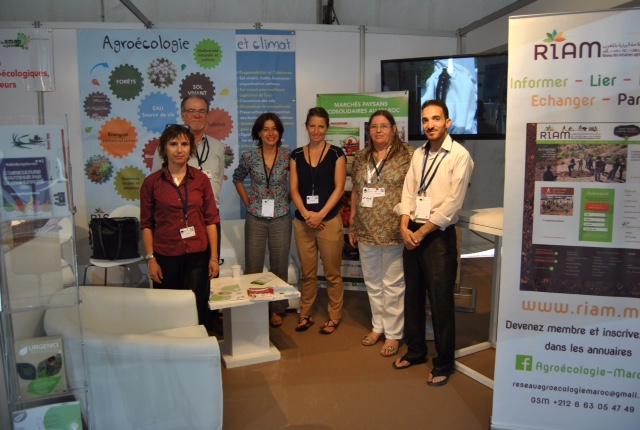 Urgenci mobilised for the first MedCOP21 in Marseilles in June 2015 thanks to the strong commitment of three of our partners: the AMAP de Provence, which is a regional Miramap network in France, the Moroccan Swani Tiqa and the GAS from Italy. The mobilisation was around the topic of the fight against climate change, one of the natural objectives of local solidarity partnerships.

Together with our partners, RIAM, Les AMAP de Provence and Terre et Humanisme, we jointly mobilised to put this project in place in a favourable framework of “development of agroecological peasant agriculture that respects both Humankind and the Environment during a first experience-sharing meeting. It took place in Provence (France) fro 29th February to 2nd March 2016 in Marseilles with representatives from 12 countries, spanning both shores of the Mediterranean: Morocco, Algeria, Tunisia, Egypt, Palestine, Lebanon, Turkey, the Republic of Macedonia, Greece, Croatia, France and Spain.

In order to present the project to a wider audience and move forward, we accepted the invitation to participate in MedCOP22 that was held 18th and 19th J

uly in Tangiers in Morocco, and thanks to the RIAM, the delegation included RIAM, Terre et Humanisme Morocco, the AMAP de Provence and Urgenci. We had a stand in the Medina of Solutions and organised a side event during the MedCOP22.

Agroecology and solidarity as a means of achieving local food security and food sovereignty in the Mediterranean region:

Most of the participants in the side event were already committed to agroecology, and the side event was late in the day, so we collectively decided the change how we would work. We settled on replying to the question: “How can we create a Mediterranean network of Local Solidarity Partnerships, and what do we need to do achieve this goal?”

We opened up the discussion to allow all the participants to share their experience and solutions rather than holding a conference-debate where those “in the know” lecture to the “learners”. At the end of the workshop, several participants expressed their thanks and stated that this workshop had made an interesting contribution to MedCOP.

The workshops included members of the Moroccan agroecology network, institutional representatives and NGO leaders. Over 20 participants brought their input to the exchanges and expressed their enthousiasm for the existing on-going dynamic.

A first round of interventions allowed RIAM and Urgenci, who were joint convenors of the side event to present themselves to clearly define the vision and mission of CSA partnerships, the role of Urgenci International Network and the CSA Mediterranean project.

The leading agroecology actors from Morocco then took the floor: Atarouch Touriya of the Swani Tiqa, Fettouma Benabdenbi from Terre et Humanisme, Zineb Benrahmoune Idrissi, Abdelghani Lakhdar and Salaheddine El Azzouzi. The made brief presentations of their hands-on experience and shared their observations and successes as well as pointing out the challenges. This opened up several ideas for consideration and action. :

The idea of building a Mediterranean network of agroecological local solidarity partnerships between producers and consumers was warmly welcomed. However we still need to define the conditions and position the network in terms of other existing or burgeoning networks and platforms.

Several important questions to be resolved include who would lead this network? Urgenci could provide this framework, as by definition, the vocation of the network is to accompany the creation of regional networks of Local Solidarity Partnerships and subsequently federate CSA initiatives at international level.