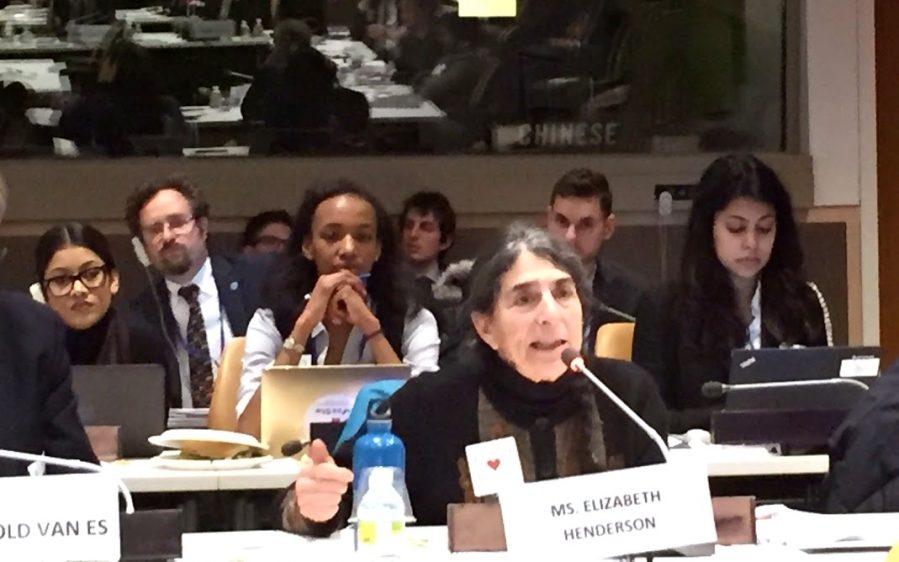 “Soils: A Solid Ground for Life”

Elizabeth Henderson, CSA pioneer and Urgenci’s president of honour, has been invited to speak at the request of Organics International (IFOAM), and traveled to New York City to participate in the World Soil Day Celebration and Closure of the International Year of Soils 2015 at UN headquarters organized by the Food and Agriculture Organization (FAO), the International Foundation for Agricultural Development (IFAD) and the World Food Programme on December, 4th.

Here is her report:

“The Permanent Representatives of Thailand, Italy and Qatar welcomed us to the gathering with statements about the importance of restoring soil health for solving world hunger.  UN General Secretary Ban Ki Moon sent his regards from Paris along with a message that sustainable soil management is essential to sustainable development. Carla Mucavi from Mozambique, the Director of the FAO office in NY, informed us that fully one third of the world’s soils have been degraded and called our attention to World Soil Charter issued by FAO in 1981.  The Charter urges governments and organizations to encourage soil conservation and the management of soils for the long term to combat desertification and improve fertility.

Together we viewed an animated video – “Soils and the Sustainable Development Goals.” Professor Dan Pennock from Saskatchewan launched a new and very extensive study – “The Status of the World’s Soil Resources Report,” written by 200 authors from 60 countries. This compendious study evaluates the major threats to soil health on all continents and proposes actions that individuals, scientists and governments can take to arrest further degradation and improve soil management.

I was one of five speakers in an “interactive dialogue” on “Soils: beyond the International Year.” Dr. Maurizio Sciortino spoke about efforts currently underway in Italy to better assess soil conservation. He pointed out the link between degraded soils and the current flood of refugees entering Europe.  Dr. Aunnop Puttaso described the program in Thailand to train soil doctors who then train farmers to spread the word to other farmers. Dr, Harold Van Es from Cornell, newly elected President of the Soil Science Society of America, told about the series of videos produced by the society and the need to promote legislative initiatives to protect soil. (He will hear from me soon as NOFA-NY develops our Organic Action Plan for the state!) Erika Joergensen, Director of the World Food Programme, again underlined the importance of healthy soils for food production.  Knowing that I would be the only farmer/peasant to speak at the celebration, I decided to just show photos of the practices we use at my farm and to introduce the new NOFA white paper “Restoring Soil Carbon.”

There was only one question from the audience – an African-American woman from NYC wanted to know what hope there was for young city dwellers who are cut off from growing food and have few sources of healthy produce.  Harold and I jumped in with the good news about the many farmer training programs underway.  The celebration ended on those positive notes – that there are steps everyone can take and many younger people are eager to take up the work of growing food in healthy soils.

This is the text of my short talk:

I am honored to be part of this celebration of the importance of soils for human life and for our planet. It seems appropriate that there be at least one farmer/peasant here today. I am here representing Organics International (IFOAM).  I am on the Board of the Northeast Organic Farming Association, one of the founding members of IFOAM back in the early 1970’s. I have been an organic farmer since 1980 and my farm is one of the oldest CSA farms in North America.  My farming has been certified organic since 1985 when NOFA started a certification program to help consumers avoid fraudulently labelled produce. The early purchasers of certified organic foods were willing to pay a premium to enable organic farms to survive the farming crisis that has not really ended in North America and has forced over 4 million families off the land.

There is only one orthodoxy in organic farming – if you have healthy soils, you will grow healthy crops and the people and animals who eat your crops will be healthy.  In my farming, keeping the soil healthy by constantly replenishing organic matter has been one of my highest priorities. I have been fortunate to farm in a very beautiful place – Wayne County, NY.

This is the view from my house, and this is an aerial view of Peacework Farm, the central portion of this image.  As you can see, Peacework is a patchwork of many small growing areas through which we rotate our 70 different crops.  We try to always keep the soil covered, either with living crops or with cover crops or green manure. We leave grass strips to keep tillage to a minimum.

This is a rye and vetch cover crop just emerging. And this is what the rye and vetch look like just before we mow them down and turn them under as food for the microherd. Another favorite cover crop is buckwheat which crowds out everything else and attracts many beneficial insects.

We use a spader to turn the cover crops into the top layer of the soil. This is what remains of the buckwheat after one pass of the spader.  A biologically active soil like ours can digest all that organic matter within two weeks leaving the bed ready for us to plant with heavy feeder vegetable crops. We also make and spread compost, using a manure speader.  The compost not only enriches the soil with the usual NPK, but also adds billions of microorganisms, encouraging a great underground diversity. You can see in this photo of our CSA members helping us plant garlic how rich our soils are. I was one of the first NY farmers to join the Cornell University Soil Working Group.  My extension agent had not shown much interest in our farm, until one day she noticed the quality of our soil. The excellent tilth and aggregate stability were a startling contrast with the conventional farms she worked with where the farmers were complaining about compaction and erosion.

I do not pretend to understand the complex life in the soil – it is the last frontier.  I like the way the British put it – organic farming is all muck and mystery. And when homeschoolers come to our farm to help dig potatoes, they love to get dirty. And here is an image of a week’s packet of our vegetables, herbs and flowers – a healthy mix of foods from our healthy soils.

In conclusion, I want to call your attention to this publication from NOFA – “Restoring Soil Carbon: Can Biology Do the Job?” On page 9 we read: “The FAO says there are 8.3 billion acres of grasslands on the globe and 3.8 billion acres of cropland.  If everyone were willing to use carbon-building practices on those acres annually the grasslands, at an average of 2.6 tons per acres, could restore 21.6 Gt and the croplands, at an average of 0.55 tons per acre, could restore 2.1 Gt.  This give us a total of 23.7 gigatons per year.  Since we are interested in restoring 106.25 Gt, that means we could do it in under 5 years!”

You can download it from the NOFA Mass website, along with other materials on the importance of sequestering carbon in the soil.

NOFA is engaged in a two-fold campaign to help farmers do an even better job of restoring soil carbon, and to spread the understanding among the public of the role that organic methods can play in regenerating agriculture by taking carbon out of the air and putting it in the soil where it helps feed nutrient dense crops and buffers the effects of climate change.

Thank you for inviting me to speak at this celebration of soils.”

You can also watch the event online, on UN web tv.org!