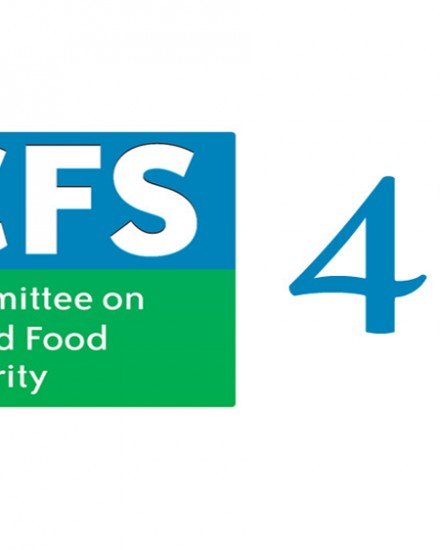 CFS41 in Rome, on October 13-18, 2014,  was a particularly active moment for the URGENCI team of Andrea Calori and Judith Hitchman. It proved to be a rich and fruitful outcome of several different levels of work carried out in recent months. Judith had been moderating the working group on Food Waste and Loss in the context of sustainable food systems since last Spring. It was a good solid working group, with participation of several social movements and INGOs.

To better understand the process here is an outline of how it works: First a subject is voted on to be included in the CFS agenda. This process has a 2-year time-line to allow the High Level Panel of Experts to do their research and write a report. Then, in the course of the summer prior to the CFS gathering, a Task Team of States, Civil Society Organisations and CFS/FAO staff formulate and input into the Decision Box. This process requires huge reactivity and does not allow for adequate consultation with social movements, which is a long-standing grief that has been expressed. It does not constitute a negotiation, merely input that may or may not be included in what is then put to CFS for negotiation. If something is written out of the Decision Box, it does not mean you can’t get it back in the course of the negotiation itself.

Our initial position was to turn up with a list of “asks” that had nothing to do with the report, as we felt that the report was only based on the industrial food system, and failed to take alternative food distribution systems or solidarity economy into account. Of course we then had to fit our “asks” into the proposed decision, box, but we made our point!

The item was on the agenda of the first day of the CFS, and the team made 4 well organised statements (cf. opening statement by Judith enclosed that can be uploaded onto the website)

The Decision Box that went to the negotiation stage had written out many of our key “asks”. But this in no way deterred out team. We set about strategizing and negotiated all week late into the night. The whole process was long, painstaking and complex, but we did succeed in getting almost all our key “asks” incorporated in the text.

Here is the final decision box for the policy document on Food Waste and Loss in the context of sustainable food systems that we negotiated, working until 11pm at night on several occasions. It was voted unanimously in plenary.

It contains several actionable items that are relevant to both food sovereignty and solidarity economy, and can be used to strengthen the global position of social movements as a whole:

a) Bringing the relevant decision making down to local authority level is a first for CFS, and is the result of a 3-year struggle on our part to gain acceptance of devolution of financial and decision-making powers at EU and African level. It allows our networks to use this document substantially in our work at local/territorial level

d) The inclusion of reference to Food Policy Councils (albeit disguised as multi-stakeholder governance bodies) is again something that can be used and taken forward, especially in the context of the EU-funded Hungry for Rights project currently underway.

e) There is also reference to opening public tenders for school meals to groups of small-scale producers; this can also be used at local level.

Other activities we engaged in during CFS were a side event on Food Waste and Loss (Judith), City-Region food systems (Andrea) and finally as an outcome of all the hard work through RIPESS, the Intercontinental network for the Promotion of Social Solidarity Economy with the U.N. Interagency Task Force on Social Solidarity economy, both participated in a side event on solidarity economy and food security (or as we prefer, food sovereignty), together with the Via Campesina.

An incredibly hard, long, intense week, but some great outcomes for Urgenci!