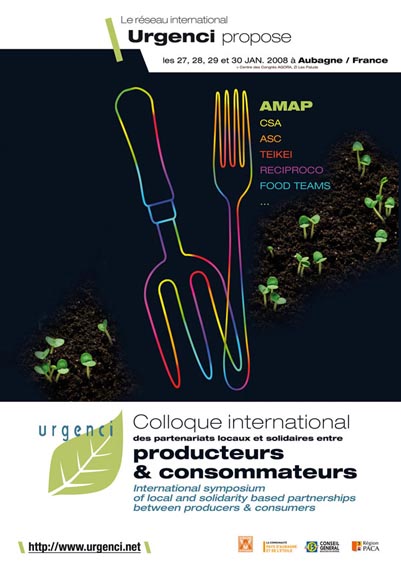 From January 26th –29th, 2008, URGENCI, the International Network of Community Supported Agriculture held their 3rd international symposium of local and solidarity based partnerships between producers and consumers. The meeting was held in Aubagne, in the hinterland of Marseilles, in the Provence Alpes Côte d’Azur Region of South East France. This town, with a population of 95,000, is the headquarters of URGENCI.

Community supported agriculture was founded forty years ago in Japan, based on the logic of providing local support to help establish young farmers. The movement is still a vibrant and flourishing mainstream source of agricultural produce in Japan today, with many families preferring the notion of direct contact and short circuits as well as a traditional appreciation of the importance of fresh organic fruit and vegetables to a more impersonal method of buying their food.

The opening speeches reminded the audience of some of the harsh realities of the global situation of agriculture today. There are over 1.3 farmers in the world, most of who suffer from hunger. This is the ultimate irony, for it is they who produce the food! Food and water are key issues in today’s society all over the world, and their increasing scarcity is a source of conflict. Agriculture is one aspect of production that can not be produced off-shore or easily relocated. The risk of global famine is real, sooner or later, as the food market is controlled by interests that are in contradiction with those of the citizens themselves. People are all too often no longer in control of what they want to farm or eat. This is the basic issue of food security and food sovereignty.

No single recipe: Inventiveness as a universal lever

The participants from 15 different countries across the world (with the exception of Latin America and Australia) then provided testimonies of their various experiences. The overriding impression was that there is no single recipe or approach. The common denominators are those of direct circuits, and up-front buying into the scheme to avoid the hardship of cash flow for the farmers. The key characteristic is one of inventiveness, of the weaving of local relationships and finding solutions that correspond to local culture in a mutual realisation that self-help and local development are inextricably interwoven. This can best be summed up in the slogan « Grow to feed and know the farmer ».

One of the significant linguistic indicators in the testimonies by farmers and consumers alike was the high use of the possessive pronoun: people frequently referred to « my farmer » and « my consumers », irrespective of country.

The methodology involved shows significant variations and degrees of commitment by consumers. This goes from the consumers participating in the work in the fields, to self-harvesting, to boxes being picked up at the farm, to bulk being dropped off at a central point where the boxes are then prepared, to boxes being dropped off and a central point and picked up or even delivered to the individual consumers. In Africa, where personal relationships are of great importance, families still traditionally buy from farmers they know if at all possible. The dumping of imported cheaper imported products is the main difficulty that needs to be confronted. The threatened stranglehold that would result from the signature of the EPAs (WTO-imposed economic partnership agreements) is something that must at all costs be fought if peasant agriculture is to survive.

In Europe and North America, a significant percentage of young farmers are not of farming stock. This corresponds to a general neo-rural movement, and a desire to return to or discover a more authentic sense of values and life. Their interest in organic farming, networking and involvement in sustainable local development is mainly hampered by their difficulty to gain access to small parcels of land. In many countries, there is also a phenomenon of an increasing percentage of market gardeners who are moving from the use of pesticides and turning to organic gardening as they become aware of the health hazards involved in certain agricultural practices. The question remaining to be resolved is frequently one of production costs versus the possibility to sell at a fair price that allows a win-win situation for both producer and consumer.

At consumer level, there are many cultural differences that need to be confronted. People need to eat, may be aware of the need to eat healthily, but the pressures of modern city life have contributed to most people eating convenience foods, and tinned or mass produced products are generally cheaper.

Yet there is an increasing awareness of the fact that healthily produced food leads to greater health in those who eat it. In Italy, the « slow food »movement has gained significant ground. In many cities in the more developed countries, yuppies and many others are moving towards the CSA system. It is slowly becoming mainstream and more socially acceptable. People are returning to their roots, learning to enjoy cooking and discovering « new » food and vegetables. Many CSA groups provide seasonal recipes with the boxes, to help people discover what to do with vegetables they may not have previously come across.

The importance of the support for schemes by Local Authorities.

Two of the key characteristics common to CSA around the world are the determination expressed by citizens to change the poor quality food available to them and their family, combined with the inadequate possibility to gain access to land to feed themselves and their families. This has generated a huge bottom-up determination to act and influence that is gaining ground. The role of networks at global level is contributing widely to the development of an expression of citizenship.

The local authorities of Aubagne have set many important examples. Agricultural land has been saved from the threat of real estate development. Green belt agriculture has become a significant part of the landscape, as in Milan in Italy and an increasing number of other cities. In Aubagne, young farmers have been helped to gain access to small farms, and CSA is alive and well. The importance of this support can not be underestimated, because it is only through a joint and broader stake-holder approach where all parties assume responsibility for their respective roles – authorities, farmers, consumers – that the CSA system can become one of true governance and citizenship.