CSAs in France are called AMAP, which stands for Association pour le Maintien de l’Agriculture Paysanne (Association for Maintaining Small-Scale and Family Farming). The first AMAP was created in Aubagne (in Southern France) in April 2001, at the initiative of a couple of farmers and an Attac group. Since then, AMAPs have had a con­siderable success all around the country.

Consumers gather in an association, which organizes the partnership be­tween consumers and a farmer. In most cases the farmer involved will supply vegetables. Then, other farmers supply this group of consum­ers with other food products such as meat, cheese, eggs, bread… with as many contracts as produc­ers. The average size of an AMAP is around 70 consumers (from 15 to 150 consumers), part­nering with one to 10 farmers.

Today, there are more than 1600 AMAP in France. However, if the figures collected in regions where AMAP are gathered in regional networks are reliable, it is clear that the ones we have from other regions where there is no organisation are probably fragmentary and maybe the number of groups are higher than es­timated. This represents more than 50 000 families and nearly 200 000 customers.

Since 2003 the AMAP movement has based its practice on a Char­ter, elaborated by the AMAP network from South-Eastern France, Alliance Provence. This charter defines 18 principles relative to the commitment of both consumers and farmers. It is a framework each AMAP has to comply with. It has been revised by a MIRA­MAP (Inter-Regional AMAP movement, national network officially set up in February 2010) working group; here is the new version of it ! 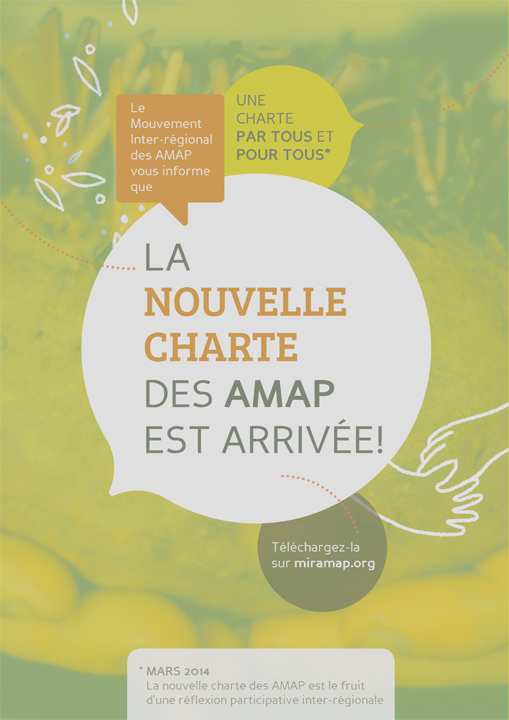