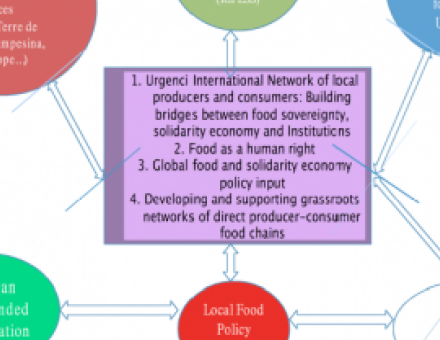 The emergence of social movements: Community Supported Agriculture, between Food Sovereignty and Solidarity Economy. The end of the 20th century can be characterised by the emergence of both extreme forms of globalisation of trade and of social movements. The spaces in which the latter emerged were not only the World Social Forum, but most specifically the thematic movements that were born from the issues on the ground that resulted from some of the most extreme and negative impacts of globalisation and industrialisation of the 1970s-1990s. Many of these movements focussed on human rights, including the right to healthy, safe food.Teikei, the Japanese-born Community Supported Agriculture (CSA) movement was born in the 1970s1. It was the response of Japanese housewives desire to ensure that they could feed their families safe, healthy food, and avoid the terrible impacts of Minemata disease caused by industrial mercury poisoning. It was defined by the Japanese Organic Agriculture Association as follows: “An idea to create an alternative distribution system, not depending on the conventional market. Though the forms of Teikei vary, it is basically a direct distribution system. To carry it out, the producer(s) and the consumer(s) have talks and contact to deepen their mutual understanding: both of them provide labour and capital to support their own delivery system…. Teikei is not only a practical idea but also a dynamic philosophy to make people think of a better way of life either as a producer or as a consumer through their interaction.”